‘No more land to build on’ 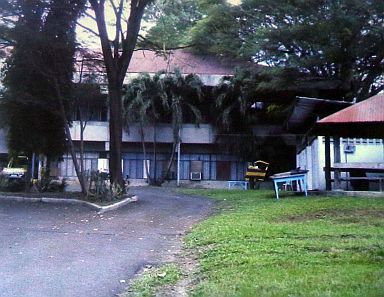 CUTTING/OCT.14,2015:Arch. Some of the trees that would be affected during the construction of additional classrooms in UP Cebu Lahug Campus.

If the University of the Philippines-Cebu (UP-Cebu) had a choice, they won’t cut down any of the 19 trees to make room for proposed additional buildings.

Based on the plan, nine trees will be cut this year and the other ten trees next year.

“There is no buildable land in the administration lot that is not occupied with trees or informal settlers,” Architect Dioscoro “Cocoy” Alesna said during yesterday’s public hearing on the issue.

Justine Balane, UP Cebu Student Council (SC) chairperson, said “students should not have to choose between proper educational facilities and protecting their environment.”

For now, the Department of Environment and Natural Resources (DENR) said it cannot issue a tree-cutting permit if UP-Cebu is unable to settle the objections of students, environmental groups and some barangay Lahug residents.

“Because UP Cebu is a public university, they have to assure that all the constituents are okay with the cutting of these trees, because these trees are very old. If those people are not okay with it, then they have to fix it before a permit can be granted,” DENR-7 spokesman Eddie Llamedo said.

A public hearing is one of several requirements by the DENR before it can issue a special tree-cutting permit. Llamedo clarified that they have yet to read the minutes of the public hearing.

The trees mostly consisting of acacia, coconut, gmelina and nangka. 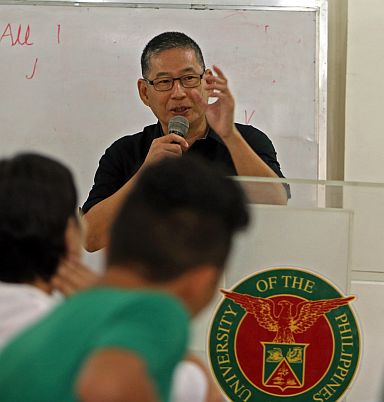 UP PUBLIC HEARING ON TREE CUTTING/OCT.14,2015:Arch.Dioscoro Alesna Jr Campus Architect present the construction of additional classrooms in UP Cebu Lahug Campus were 9 trees will be affected during the construction.(CDN PHOTO/LITO TECSON)

These buildings are in line with the school’s Approved Land-Use Plan due for completion in 2025.

During the hearing, Alesna also discussed a seven-story Sciences Building approved for 2016 which will affect four trees.

Alesna said there is a proposed dormitory building which, if realized, will result in six trees being cut down.

Lawyer Rene Abcede of the UP Cebu Legal Office said their case with the informal settlers has not yet been filed, since they are still looking for a relocation site.

Abcede said moving hundreds of informal settlers may take more time and the school is working on a very tight schedule to build the new facilities.

The budget for the new facilities allocated to the university last year will be returned to the national government after two years if it remains unused.

“It will be a waste if we do not pursue our new buildings. And most of all, the students will suffer,” said Rowena Mende, UP Cebu Social Sciences Cluster chairperson.

Mende said the school is in dire need of new classrooms, especially with the state of the Arts & Sciences Building, which was originally built to be a dormitory.

“Our classrooms are very small. We are holding classes with 30 to 40 students, and the classroom can only accommodate 20. I can’t imagine what will happen to students during emergencies,” Mende said.

Teresa Ruelas of the advocacy group Mission Cebu questioned UP Cebu’s lack of effort to consult with expert urban planners and environmental architects.

“If you do have to cut the trees, then the plan should also try to make up for that loss. Plant trees in the school, or have a garden in the rooftop. Just make up for the environmental damage,” Ruelas said.

Read Next
Pa remembers how Rizzini won her battles, except cancer