Youths ‘unaware’ they are online bullies 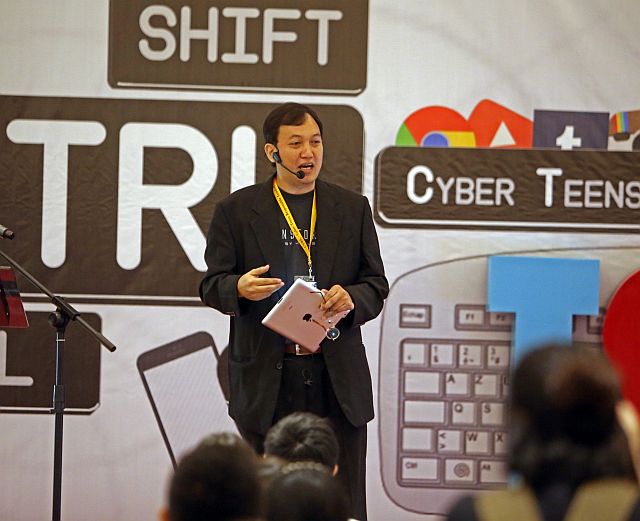 Blogger Severo “Sonnie” Santos speaks out on cyber-bullying during a Unicef conference on the issue at Bayfront Hotel in Cebu City. (CDN PHOTO/LITO TECSON)

COMPARING social media to a double-edged sword, a digital advocate urged young people to be extra careful  in dealing with others in cyberspace.

Severo “Sonnie” Santos, a blogger and corporate trainer, said many youths  are not even aware when  they are abusing their  peers through social networking sites.

“As with a sword, when you play with social media and you don’t know what you’re doing, chances are you and the people around you will get hurt. However, if you’re trained on how to use it, it can be a value-adding tool,” he said.

Santos was the main speaker at the start of a two-day conference on cyber-bullying at the Bayfront Hotel in Cebu City yesterday.

About 300 students from  schools in the cities of Mandaue, Cebu, Lapu-Lapu, and Talisay attended the conference organized by the Child Protection Network and the Salesian Youth Movement with the United Nations Children’s Fund (Unicef) as its major sponsor.

Cyber-bullying refers to “acts of cruelty committed through the Internet or other forms of electronic media that strips one’s dignity or causes reasonable fear or physical or emotional harm.”

Cyber-bullying leads to a  feeling of degradation, frustration, and even thoughts of suicide.

In the past, Santos said transmission of information was exclusive to a select group.

But the emergence of social media, he said, redefined how content is produced, transmitted, and consumed.

“Because of our democratic space and kids’ inclination to play around, young people find it difficult to distinguish having fun from committing cyber abuse, or exercising freedom of expression from encroaching on another persons’ rights,” he explained.

He said social media’s user-friendly and interactive qualities coupled with youthful  curiosity and the need for connection produce uncritical users of new technology.

Studies, he said, indicate that teenagers do not just fall victim to cyber-bullying, but are also the bullies themselves.

He said teenagers need to be taught about the risky and safer use of cyber technologies in order to empower them to create wholesome environments for themselves and their peers.

Orendain said the creativity of young people and their hands-on expertise with the technologies that bring about cyber problems can also serve as vehicles for solutions.

Margarita Ardivilla, a child protection specialist of Unicef who spoke at the start of the conference, said cyber-bullying “ can be done anonymously and we lack sanctions for those who do it.”

She said young people need to be taught how to be responsible digital citizens.

“While the onus is on the government to ensure that youth participation is not a one-shot event, the youth also has the responsibility to find paths to influence others and contribute in the design of strategies to ensure greater protection,” Ardivilla said.

She said some individuals do not know that they already hurt others through posts on social networking sites.

“What may be sent as a joke may not be viewed as one. The sender may not see its impact,” she said.

Dr. Naomi Poca, conference chairperson,  said one has to advocate cyber responsibility and not just be mesmerized by the Internet.

Read Next
‘Listen to those who suffer depression’