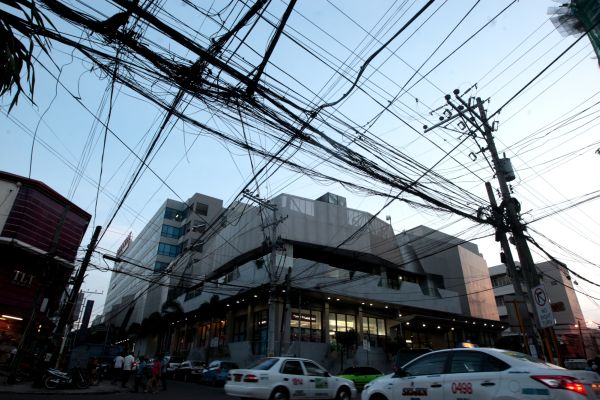 Utility firms claim that they have done improvements in areas where there are dangling and sagging wires but Councilor Nestor Archival Sr. who chairs the committee on utilities still has to see substantial improvement in most parts of the city. (CDN PHOTO/TONEE DESPOJO)

Some of the eight firms which pledged to finish the work by Oct. 28 reported “improvements” in parts of the city in time for  Rama’s milestone, a deadline he said would come with “a chainsaw” to remove unbundled wires and stray posts.

“I still would wish to see  documentation that will have to be presented so we would know whether they have aligned with what they want to achieve,” Rama told Cebu Daily News last night.

The mayor didn’t do any cutting or revocation of permits yet.

The firms, including the Philippine Long Distance Telephone Company and Visayan Electric Company, are expected to present their report to the mayor tomorrow.

Rama said he would also bring up the unfinished business of 13-year-old Ralph Bureros.

The boy’s death last July when a PLDT pole fell on him after a passing truck snagged low-lying overhead wires in barangay Tinago, revived attention on the problem of spaghetti wires and triggered the written pledge of utility firms to act by Oct. 28.

After the accident, however, no firm or firms were identified as the owner of the fallen wires in Tinago.

Cebu Daily News earlier learned from the boy’s father Edmundo that the family still owes the funeral parlor around P8,000. He said the tragedy was already forgotten by the public, except by Raul’s  next of kin.

Veco gave the family P10,000 immediately after the accident, while PLDT gave P15,000.   A quit claim  was reportedly signed.

Mayor Rama said he would ask the utility firms tomorrow to help the Bureros family.

“They should have shared their blessing more with the family who  decided not to file a case against them. The boy is gone. That’s a (human) life,” he said.

And if they don’t cooperate, Rama said, he would find a way himself to help the Bureros family.

Globe Telecom, in a statement, said it has complied with the firm’s commitment to bundle dangling wires together with other utility companies in Cebu.

No breakdown or details were given though.
“Following discussions with the city government, Globe has addressed the problem of low-lying, sagging and dangling wires by bundling cables of various utility firms in certain areas in Cebu in compliance with a memorandum of understanding signed with the Office of Cebu Mayor Michael Rama,” said Froilan Castelo, Globe General Counsel.

“Globe is deeply in committed in ensuring the safety not only of our cable wires and poles but also of our equipment as we continuously upgrade our facilities to provide superior customer experience,” said Castelo.

He received an accomplishment report from the utilities but said it consisted only of before-and-after photos of certain areas in the city with pressing dangling wire problems.

“It’s not easy to determine what their progress is. I would have wanted to see a work schedule for 90 days so we would really know what they have accomplished so far,” he told CDN.

“Of course they’ve done something but it’s not really substantial for me,” he added.   Archival said he would write the utility firms to ask for a more comprehensive report.