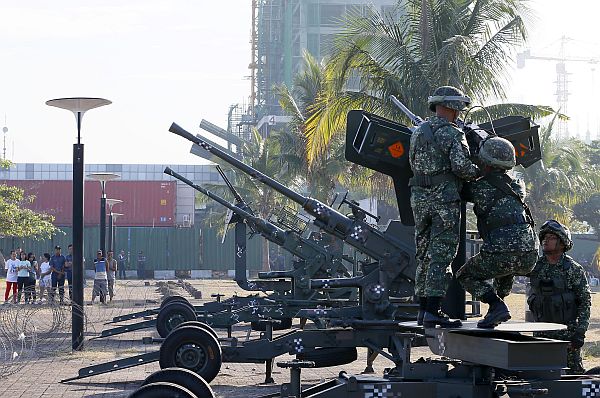 Do not bully the Philippines.”

Although not naming China, former president Fidel V. Ramos was clearly calling on Beijing as he stressed that security issues must also be discussed during the Asia-Pacific Economic Cooperation (Apec) Summit in Manila.

“[L]et’s not forget that the overwhelming, overriding, the supreme goal of the Philippines and I would say also for the countries because they will also host, is to prosper your neighbor,” Ramos said at the Veterans Day celebration in Taguig City last week.

With its nine-dash line, China is claiming most of the resource-rich sea. The Philippines, Brunei Darussalam, Malaysia, Vietnam and Taiwan which have overlapping claims in the sea have challenged China’s claim.

In an apparent early defeat for Beijing, the Permanent Court of Arbitration in The Hague, Netherlands has ruled that it has jurisdiction over the case filed by Manila, sending a message hope to other challenging countries.

China has confirmed that President Xi Jinping is set to arrive in Manila to attend the APEC CEO Summit along with United States (US) President Barack Obama.

Beijing, however, was successful in convincing Manila not to discuss the contentious territorial issues during the meeting.

But the defense cooperation and the South China Sea dispute are on the agenda in the bilateral meeting between Obama and President Benigno S. Aquino III this week.

Obama’s trip to Southeast Asia will focus on maritime issues as US tries to push its interest in the region.

No prosperity without security

Recognizing that security is vital for economic growth, Ramos believed that security issues, even not the contentious ones, should be the common concerns of the 21-member economies.

“We have to push security issues without focusing on controversial territorial issues because the common interest of all of these member economies all around Asia and the Pacific on both sides is inclusive, progressive, socio-economic growth and security for our respective countries,” Ramos said.

“But you cannot have progressive, inclusive economic and social reform where there is still conflict and killing in many parts of Asia-Pacific.”

Looking at the future of two generations from now, Ramos said these issues should be tackled in the summit:  “safety of navigation, maritime law enforcement, safety of life at seas and freedom of shipping for the world’s oceans of commerce which are here in the APEC area. Asia-Pacific.”

The construction and military activities in South China Sea are seen as threats to peace and freedom of navigation in the region.

Ramos was hoping that the issue will be raised during the summit, even outside the official events.

“It may be very informal. After a few drinks and they’re a little tipsy. Some of these leaders hopefully [should] talk about it,” he said./INQUIRER.NET