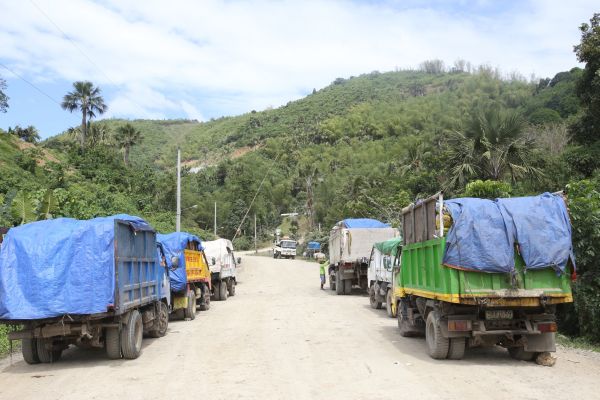 TIPPING FEES. Cebu City government-owned garbage trucks line up before heading uphill to a private landfill in Pulog, Consolacion town. Is it better to outsource the work and let a private firm handle this? (CDN PHOTO/JUNJIE MENDOZA)

The Department of Public Services (DPS) is seeking a P238.2 million budget for garbage services next year or double its current figure to afford a new scheme of outsourcing services of waste collection and diposal in Cebu City.

It would cost the city government P1,800 a ton in the new scheme, which is higher than the current P1,500 a ton.

The volume of trash to collect is also projected to be bigger at 520 tons daily instead of just 300 tons.

In yesterday’s budget hearing, DPS assistant department head Rogelio Legaspi said the city would benefit from skipping the use of a Waste Transfer Station and avoid the “hassle” of maintaining a fleet of trucks with additional costs for fuel and salaries of drivers.

“I’m against outsourcing because that’s a source of money-making,” said Councilor Sisinio Andales.

They target 520 tons of trash generated daily, of which 250 tons will be disposed through outsourcing, where “private owned trucks will go around the barangays and transport garbage immediately to the landfill in Consolacion town, north Cebu,” he said.

The rate of private haulers at P1,800 per ton includes a tipping fee of P700 per ton in the Consolacion landfill.

At present, barangay garbage trucks, mostly from Cebu city’s south district, bring collected trash to a Waste Transfer Station in barangay Inayawan. From there, private haulers transport the garbage to Consolacion town for P1,500 per ton.

-P68.9 million for tipping fees for barangay and city-owned garbage trucks that deliver trash straight to the Consolacion landfill at P700 per ton.

For the current year, DPS proposed a P122 million budget for garbage services. The City Council approved only P51 million for 2015 and approved an additional P50 million in May when DPS said funds had run out to pay haulers and tipping fees.

A request for P87 million more for the last quarter remains in limbo as part of the controversial P2.8 billion Supplemental Budget 1 which the BO-PK-dominated Council has repeatedly refused to discuss.

Osmeña pointed out yesterday that the DPS has not used up its budget for tipping fees this year.

As of October 15, the city only obligated P48.5 million for tipping fees out of P2.3 million earmarked for it and has a balance of P147,000 based on a Statement of Appropriations, Obligations and Balances (SAOB).

“It’s not enough for you to say there’s no money and that’s why there’s uncollected garbage. That’s not true,” Osmeña said.