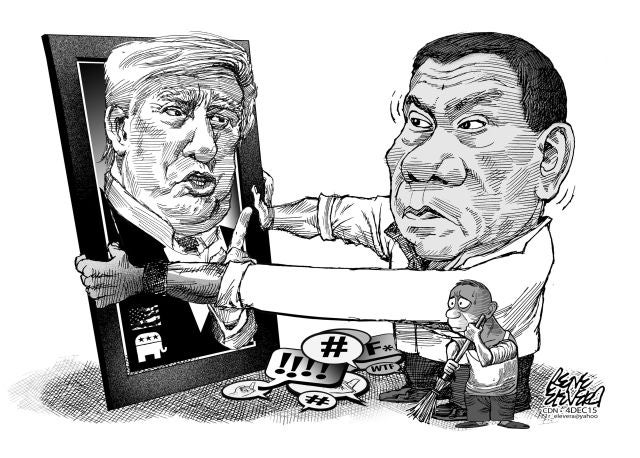 It’s been four days since he insulted Pope Francis, but newly minted presidential candidate and Davao City Mayor Rodrigo Duterte is still feeling the public backlash over his comments.

Those who know the mayor or who have watched him on regional TV are familiar with his brash, often  acrimonious tirades against  officials and about  burning issues of the day.

Aside from former justice secretary and now senatorial candidate Leila de Lima, the mayor has many  pet peeves, including his avowed reason for running for the presidency, the Senate Electoral

But no amount of goodwill generated by his confirmation to run as well as momentum created by his topping of the latest Pulse Asia survey could have spared or shielded Duterte from the public and Church backlash over his insulting the  Pope.

To be fair, while a significant number of Filipinos were shocked and offended by his remarks, his supporters were quick to defend him. After being castigated by the Catholic Bishops’ Conference of the Philippines (CBCP), Duterte threatened to expose the abuses committed by priests against him (when he was young, he said) and other minors and women.

But that threat  served to further polarize public opinion for and against him.

And that’s probably part of his plan, according to Sen. Juan Ponce Enrile, who  compared Duterte’s presence and campaign style to American businessman Donald Trump.

In the  US 2016 campaign trail, Trump is acknowledged as the Republican Party frontliner despite offending Latin Americans and the liberal sectors of American society, including Hollywood and the US media for his stand on immigration and a host of other issues.

But that’s where the similarities end.

Unlike Trump who’s driven more by his business acumen and skills, Duterte brings with him years of experience in local governance and a tough-as-nails approach to eliminating crime, which was what drew him fame and made him an intriguing presidential prospect to Filipinos  who’ve heard only snippets of his governance style.

Now that he is front and center of PDP-Laban’s national lineup, Duterte has shown  Filipinos what he is, and a lot of them aren’t used to his personal style.

Combined with his aggressive stand on issues like the Chinese expansion and his threats to close down an uncooperative Congress, Filipino voters are wondering whether they will experience a repeat of martial law under Duterte.  And whether they really want a president who brags about having two wives and several girlfriends.

When the novelty wears off, Filipino voters will see for themselves  whether he’s the best  in a field of four candidates vying for the highest post in the land.