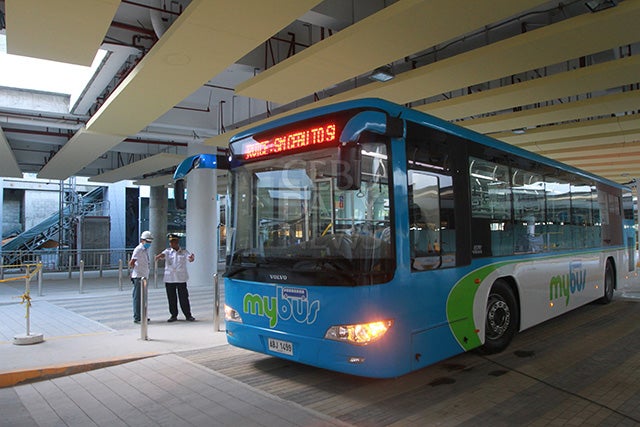 Barely two weeks after the SM MyBus units started serving selected routes for free, a transport group is planning to bring in its own fleet of buses by next year.

The Cebu Integrated Transport Cooperative (Citrasco) plans to purchase up to 50 buses from manufacturers in Cavite and Laguna.

Other features of the proposed 50-unit fleet include a Global Positioning System (GPS) and Wi-Fi.

Like SM MyBus, Yu said their mode of payment will be through electronic card.

“We will try our best that just like in Singapore, cards will also be used in other public utility vehicles,” he said.

The Land Transportation Franchising and Regulatory Board (LTFRB) issued a franchise for only three MyBus units for the Talisay-Mambaling route. The franchise application for the other buses, targeted to reach 77 by next year, is still pending.

LTFRB has also approved fare rates for the MyBus units. But the buses are offering free rides to the public up to December 15, pending the approval of franchises for all proposed routes.

After seeing the buses in action, Yu of Citrasco said they hope to do the same.

“We will basically do the same template just like the SM MyBus. We will also have our own developmental route,” Yu said.

He said their proposed fleet of buses can meet the requirements set for High Quality Public Transport System (HQPTS).

Citrasco was among those that voiced opposition to the bus system during a public hearing held by the LTFRB last October, saying it will cause traffic congestion and drive them out of business.

But the buses received support from civil society groups, who said it will help prepare Cebu City for the Bus Rapid Transit (BRT) system project which is expected to operate by 2018.

Yu hoped that their application for developmental routes for their own fleet of buses will also be approved by the LTFRB.

He said they applied for developmental routes from the agency long before SM submitted their application, but LTFRB failed to act on it.

Yu also said their buses will be comparable to the European-made SM MyBus units.

“A study for a developmental route will be conducted by the Department of Transportation and Communications (DOTC) and it is better to have endorsement from the local government units (LGUs),” he said.

Rafael Yap, head of the Cebu City Transportation Office (CCTO), was non-committal on hearing plans by Citrasco to operate its own fleet of buses.

“We hope that this offer of local operators to operate some services (similar to) MyBus signifies their readiness to adhere to the franchise requirements and upgrade to high quality public transport for Cebuanos,” Yap said.

In a public hearing at the Cebu City Council last month, Yap supported the installation of an additional bus terminal at the Robinsons Galleria mall near Pier 4 instead of more jeepneys, saying the area is already serviced by 928 jeepneys.

He said these jeepneys were rerouted due to road reconstruction in the North Reclamation Area.

The first MyBus route is a 12-km distance from Mandaue to Mambaling at P25.

The second route covers 10 km and starts from Talisay City to Mambaling also for P25.

The fourth route which covers Talisay to Mactan–Cebu International Airport (MCIA) at 24 km is pegged at P75;

Talisay to Mambaling at 11 km is for P25 and Mambaling to Mandaue City at 8 km is also for P25.

All these routes pass through SM Seaside City at the South Road Properties (SRP) which opened last November 27 and caused heavy traffic congestion.

The management of Robinsons Galleria has asked Metro Rapid Transit to establish a terminal in their area prior to their mall’s opening on December 10.