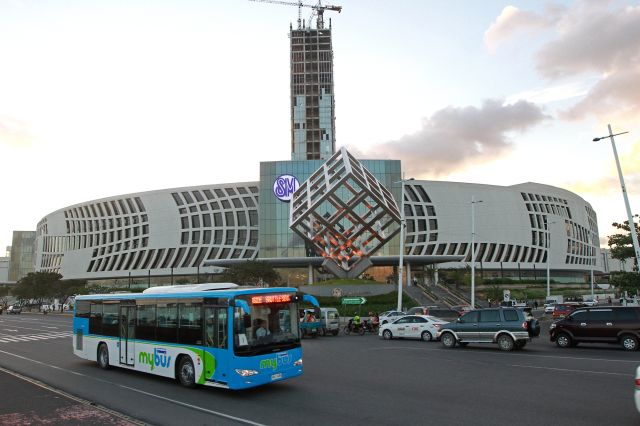 Only SM employees ride the air-conditioned MyBus units for now. A dry run of the modern buses started yesterday with hourly shuttles to the soon-to-open Seaside City mall in SRP. (CDN PHOTO/TONEE DESPOJO)

Fare rates were approved yesterday for the modern fleet of SM buses in Metro Cebu but the public has to wait longer to ride them because a franchise still needs to be issued.

The Land Transportation Franchising and Regulatory Board (LTFRB) board in Manila approved rates of P25, P40 and P75 for the buses.

“Yes, it is approved but they could not collect these fares because their franchise application has not yet been approved by the central office,” said LTFRB Regional Director Rey Elnar, who received a copy of the order yesterday

After weeks of lying idle, some MyBus units pulled out of SM City’s parking lot in Cebu City yesterday to shuttle employees to and from the soon-to-open Seaside City mall at the South Road Properties (SRP).

No fares were collected.

The passengers had to show their company ID cards to identify themselves as workers of SM or retail shops there.

The operator Metro Rapid Transit Services, Inc. applied for a franchise to operate a high quality public transport system (HQPTS) for a route from Talisay City to the Mactan Cebu International Airport, with a bus stop at the new SM at the SRP, among others.

It wasn’t immediately clear why the fare rates were approved ahead of a franchise.

Elnar said the LTFRB central office is still waiting for the official reply of transport groups opposing the new buses to the comments of Metro Rapid Transit aired in a public hearing and petitions.

An LTFRB team conducted a roadside inspection to check if the MyBus dry run was going well yesterday.

“No fares were collected. There was no violation,” said Emil Membrillas, LTFRB 7 assistant information officer .

Yesterday’s dry run was a prelude to the mall’s opening on November 27 as SM’s biggest mall outside Metro Manila and the fourth biggest in the country. 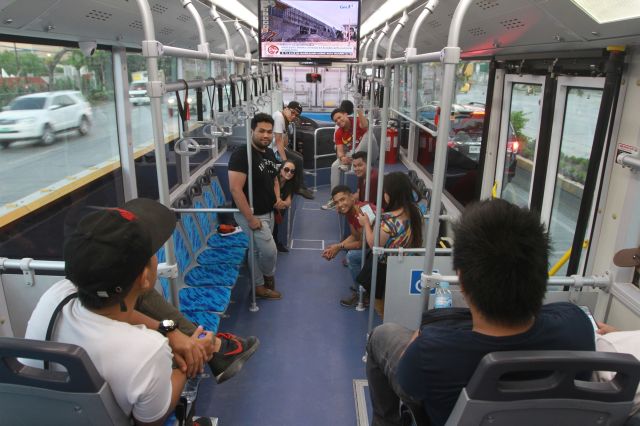 Day one of the dry run has SM employees enjoying a free ride on an air-conditoned MyBus that shuttles between SM Cebu and the new Seaside City mall in the South Road Properties. The bus can carry 50 passengers and has CCTV cameras. (CDN PHOTO/TONEE DESPOJO)

A bus left the parking lot every hour with employees aboard. No jeepneys pass the SRP area and taxi cabs are rare in the reclamation area.

Tents and monoblock chairs were set up at the SM parking lot as a temporary bus station. Trips were scheduled every hour.

CDN hopped on the 4 p.m. trip with five mall employees for the 25-minute ride to SM Seaside City.

John Paul Varon, a merchandising manager, sat at the back of the 12-meter-long bus.

“It’s very convenient because of the availability. The ride was worth it,” Varon told CDN.

The air-conditioned bus has two doors – one in front and another at the center – and can carry 50 passengers. Bus driver John Rey Kirong wore his blue polo uniform with a name pin, and black slacks.

Two closed-circuit television (CCTV) cameras in front and two at the back ensure a view of everyone on the bus. A monitor in front shows video footage from both ends.

Kirong said WiFi and a global positioning system (GPS) will be installed soon.

The first row of three seats is reserved for persons with disabilities (PWDs). Behind the row is mounted a fire extinguisher.

In the middle of the bus are overhead hand grips for passengers who have to stand. A television set hangs from the ceiling.

Near the center door, a white seat is reserved for any passenger on a wheelchair who can also use a ramp to get on and off.

To reach raised seats at the back of the bus, a passenger has to take three steps up.

While commuters are excited for MyBus to operate, public utility vehicle operators are not.

They said the modern bus fleet would just worsen urban traffic and drive them out of business.

Franchise terms would require the operator to establish bus stops, poles and stands.

Elnar said these sites still needs to be identified.

He said the request of Robinsons Land Corp. for a bus stop at the soon-to-open Robinsons Galleria Cebu in the North Reclamation Area between the two SM malls, still needs to be studied.

The Galleria near Pier 4 targets to open on December 10.

Like SM Seaside City, it is not served by a jeepney route at present.

Other franchise conditions include the submission of monthly reports on bus operations as well as daily safety and maintenance checks before first service in the morning.

LTFRB must also be given access to all raw data from the GPS, ticketing system and CCTV feeds.

MyBus already has CCTV cameras, but still has to install GPS, free Wifi and an electronic (cashless) ticketing system.