‘Continue to pray for the world’ 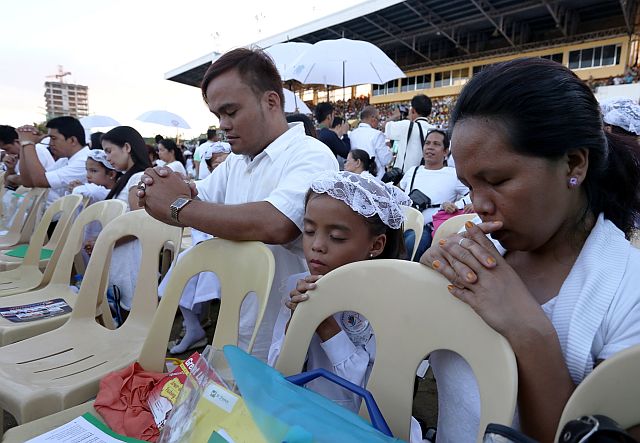 Filipinos are among the most fortunate Catholics in the world because they have the freedom to practice their religion with no fear of persecution, which is but a far-off dream for many other countries.

Fr. Frédéric Fornos, S.J., International Director of the Pope’s World Prayer Network, said he believes this freedom Filipinos experience every day, should be treasured and should be dedicated to prayer.

“Filipinos are lucky. In many other countries, there is fear when you are a Catholic. Here, you have no fear. Therefore, I urge every single Filipino, Cebuano, to continue praying for the world and to join Pope Francis’ mission of worldwide prayer,” Fornos told Cebu Daily News.

Fornos, who works closely with Pope Francis in the Vatican, was among the foreign delegates in the 51st International Eucharistic Congress.

He said that in his stay in the Philippines, he has observed how openly people proclaim their love for God.

He cites the grand festivals the Philippines holds such as the Sinulog Festival, and even the procession of the Black Nazarene, which were all done in dedication to Jesus.

Fornos also shared how he was still in awe of the IEC Procession last Friday night, of how solemn it was, and how he could feel the genuine love Filipinos have for Christ.

“Just looking at all of these people praying for the rest of the world, it is heartwarming. Filipinos should never stop this prayer. Continue it outside the IEC, and bring prayer to every aspect of your life, because after all, the world needs your prayer, all of your prayers,” Fornos added.

Fornos said that whenever he and the Pope talk, Pope Francis never forgets those all over the world who silently perish from all forms of suffering—from poverty, hunger, strife, abuse and especially those who have been silenced.

Fornos relayed that Pope Francis fervently believes that what is needed is the prayer of many, citing there is strength in numbers.

“When we see all the problems, difficulties, war and divisions in so many countries all around the world, we see the need for prayer. Prayer is the reflection of our need for others to experience the love of God, so He will transform not only our hearts, but the hearts of those who have lost their way,” Fornos said.

Fornos, who also works with the Eucharistic Youth Movement, also emphasized the role of the youth in perpetuating the culture of prayer.

“The youth play an important role in making sure that prayer becomes a part of many other people’s lives. Here in the Philippines, the youth are so influential, dedicated, and so powerful with their words and their technology, and are capable of so much,” he added.

Fornos hopes that together, the youth and all Filipinos, would pray for the rest of the world, which according to him, is suffering.

He encourages Filipinos to pray every day, for the people to begin understanding one another, and for people to be united despite religious and cultural diversity, which are two of the prayer intentions of Pope Francis for January 2016.

Pope Francis’ prayer intentions are shared in the ‘The Pope Video’, which is released every month this 2016, on the Pope Video’s Facebook page.

These prayer intentions serve as challenges for the world, to join Pope Francis in prayer for specific issues or problems in the world that need attention.

“Worldwide prayer is the vision of Pope Francis, and Filipinos, you, and your freedom and undying passion for God, can contribute to this monthly prayer, and bring hope to many who have lost their way,” Fornos said.