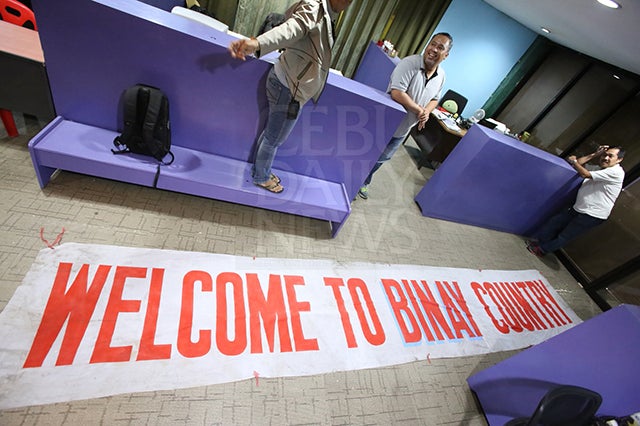 It was Team Rama and not Bando Osmeña-Pundok Kauswagan (BO-PK) that was responsible for setting up the “Binay Country” streamer along South Coastal Road last Sunday.

“Is he (Rama) the same person who put up the streamer? I think so,” Osmeña said while holding a printed copy of the picture.

Osmeña said he wanted to clarify that they were not involved especially since Team Rama council candidate Joy Pesquera claimed in her Facebook  posts that Osmeña’s son, Miguel, was responsible for putting up the streamer.

Osmeña said he called for the press conference early as he was  flying to Manila  to attend the wedding of a nephew and would be  gone for one week as he was also headed for Baguio City.

He said Rama was “making a fool out of the people” and that doing selfies during the Holy Communion “clearly show(ed) he had no respect for the activity and the Holy Eucharist.” 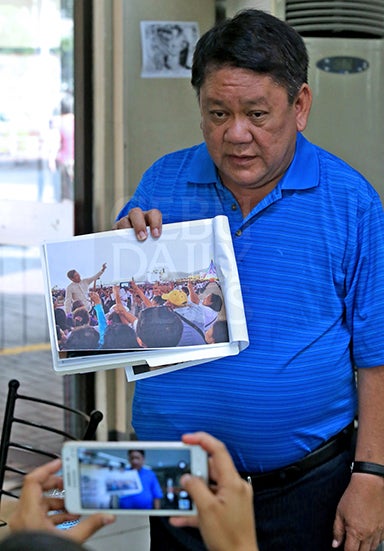 Blaming BO-PK for the streamer, Osmeña said, was a “desperate” move on Team Rama’s part.

He said they would not  be filing cases against Pesquera for tagging Miguel as the alleged culprit.

Osmeña said she was just seeking attention and because “she’s losing.” Pesquera is running for a council seat in the May elections under Team Rama.

Osmeña also criticized the investigation being called by Acting Mayor Edgardo Labella, saying nothing would come out of it.

“They will only investigate if it’s us. But it’s not our fault. So nothing will come out of it,” he said.

But Pesquera said she didn’t really name Miguel as directly responsible for putting up the streamer.

Instead, she said she only referred to  the group of supporters of BO-PK  who were “being handled by Tomas’s son.”

The streamer made of canvas cloth with the words painted “Binay Country” in red, is kept at the office of City Hall’s Prevention, Restoration, Order, Beautification, and Enhancement (Probe) team on the second floor of the Carbon Market.

Probe chief Raquel Arce said as part of procedures when clearing illegally placed posters and streamers, they would just keep it in their warehouse.

“Sometimes the agriculture department would ask for materials to be used as a bed for soil. The DSWS also asks for them to give to homeless people,” she said.

Considering there were issues concerning the streamer, she said her office would  just keep it for now.  Arce admitted that she has not received any order to investigate the incident.

Pesquera also said she has yet to check  on updates on their own investigation since, she said,  she was busy yesterday.

She earlier said on Facebook  that the streamer was a “cheap political gimmickry of Binay’s opponents” intended to portray the Vice President in a bad light.

She said they were reviewing surveillance cameras in the area to identify those who put up the streamer.

Asked to elaborate, Rama said he would do so in today’s press conference.

Police were also reminded not to remove any unauthorized campaign material, unless ordered by the Commission on Elections (Comelec) regional office.

Chief Supt. Manuel Gaerlan, acting Police Regional Office chief, said this was one way to keep the police politically neutral as much as possible.

“If there are questions on our political leanings and activities, we will refer to Comelec to shield the PNP from any accusation,” he said.

The campaign period for national elective posts like president, vice president and senators starts on February 9 while that for local posts starts on March 25.

Before the ban on the transfer of personnel last January 10, at least 141 personnel from the PRO-7 were reassigned from their posts after it was determined that some of their relatives are running in the upcoming elections this year.

Gaerlan said the police have no authority to remove any campaign material unless otherwise directed by the Comelec.

“If the Comelec will have to remove them (materials), we will accompany them to provide appropriate security but it will not be the police who will take them off,” he said.

Gaerlan said any police officer seen removing any campaign material would be investigated and face sanctions.

Read Next
Garcia clan matriarch passes away at 82