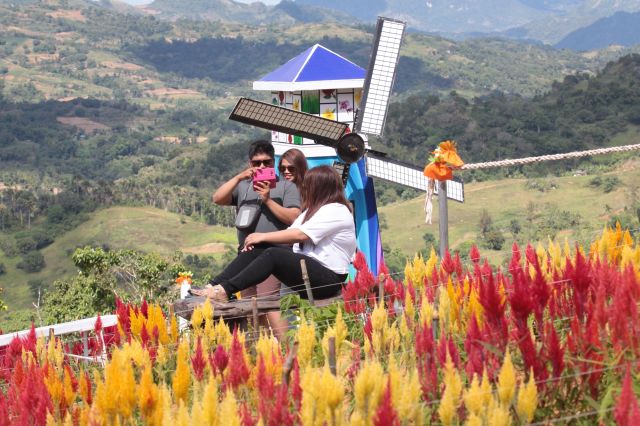 SIRAO GARDEN. More visitors are expected to be drawn to the flower garden in Barangay Sirao with the owner, Maria Elena Sy Chua, planning to grow Burlas in red and yellow all year round. Among the newly added attraction is a windmill. (CDN PHOTO/JUNJIE MENDOZA)

The Sirao flower garden, managed and owned by Maria Elena Sy Chua, reopened its doors to selfie-hungry tourists with more varieties of flowers and souvenir items that were brought in by Chua from her recent travel to Amsterdam.

Chua, an international flight attendant, said that reopening the flower garden with more dainty decorations was her way of giving back to the droves of visitors who come to the garden mainly just to be photographed with the celosia in bloom.

Unlike in October last year when the celosia blooms were meant to be harvested for the All Souls’ Day and All Saints’ Day commemorations, celosia in red and yellow are there all year round for tourists to see and take photos with.

“If they want to come here, I want them to be happy, enjoy nature and the fresh air. They can bring food, especially families. They can do picnics here,” she said.

Upon arriving at the flower garden, visitors will be greeted with the sight of a white picket fence and rope-guided pebbled pathways that lead to the bottom of the small farm where a little kiosk has been erected to house the image of the Señor Sto. Niño, Cebu’s patron.

Twelve beds were also planted at the upper portion of the hill in the shape of a heart. Visitors can step inside these hearts of flower through openings that were created to ensure that visitors will avoid stepping into the buds.

White wooden letters that form the words “Sirao Garden” and a “Little Amsterdam” (as the tourists have come to call the garden) can be found at the heart of the hillside garden.

Signs cautioning visitors against stepping into the celosia flower beds have been installed all over the garden to avoid a repeat of the damage caused by enthusiastic tourists who ended up stepping on and destroying the plants in their effort to get perfect photos of themselves among the flowers.

A windmill built by Maria Elena’s husband, Alfredo, also adorns the garden, alongside the traditional Dutch wooden shoes, made in shades of black and pink.

The celosia now have shorter stems, a product of an experiment that Chua and her gardeners tried when they planted the flowers in November last year.

Celosia were usually planted around the third quarter of the year and began to bloom in October when the weather began to get cold, Chua said.

Another added attraction is the Dutch national costume, which visitors can rent for P30 for an added feel of being in a garden in Amsterdam.

Chua said she came home from Amsterdam with some other varieties of flowers, including sunflower, which were planted at the bottom part of the garden, where the celosia flowers once stood in October.

“What we are trying to do is to make it last for a year. We already planted new stems on the right side of the hill so they could bloom after the other side is ready for harvest,” she said.

HOW TO GET THERE

Visitors couldn’t be happier to be greeted by celosia in bloom any time of the year.

Among them was Melba Grace Donio, 24, a native of Lanao del Norte, who said that the visit to the Sirao garden was one of the highlights of the tour that she gave to her friends who came to Cebu last January for the Sinulog Festival.

“We were visiting local tourists spots here in Busay and the habal-habal (motorcycle-for-rent) drivers recommended this one. The flowers were nice and bloomed in different colors . . . just as we had expected,” said Donio.

To get to the flower garden, one can take a habal-habal in Barangay Lahug for a fare of P30 per person, said Chua.

Another set of habal-habal driven by Sirao residents are also found outside of the garden to bring visitors down to Lahug, also for a fare of P30 per passenger.

Read Next
Heavy traffic in Lapu, Mandaue despite holiday