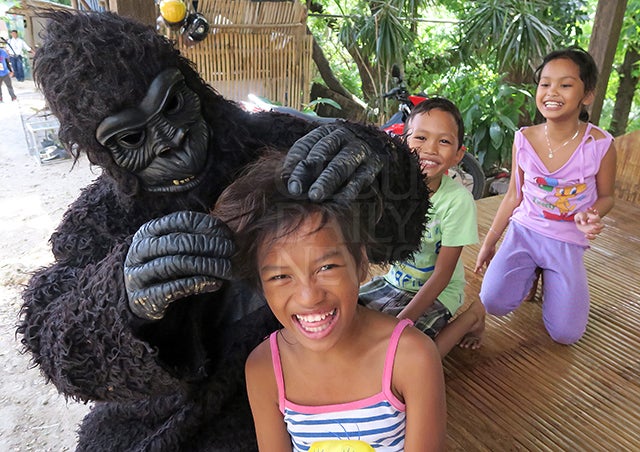 A zoo keeper dressed up in a gorilla suit plays with children at the Cebu City Zoo a day ahead of the Chinese New Year celebration. (CDN PHOTO/TONEE DESPOJO)

CONGA, an ape mascot, had a treat to visitors of the Cebu City Zoo (CCZ) on Chinese New Year.

Conga, named after the zoo’s only black ape, roamed around the zoo and mingled with the crowd to welcome the Year of the Monkey, zoo manager Giovanni Romarate told Cebu Daily News.

Romarate said he brought the monkey costume when he started working for the zoo in 2007, as Conga was the first animal that could be seen by visitors entering the zoo.

Conga, a female black ape, has a little tree house on top of a bamboo foundation tied in between two trees, about a meter away from the zoo’s entrance.

Nealyn Dansalan, 12, and brother JL, 10, both of whom were frequent zoo visitors, were at first hesitant to approach the mascot but later found themselves playing with him.

By bringing out the mascot, Romarante said they hoped that more visitors would come to CCZ and see Conga.

He said the number of zoo visitors declined last year after CCZ’s access road in Beverly Hills Subdivision was closed by the subdivision’s homeowners’ association.

Buses or coasters with tourists on board could no longer visit the zoo since the alternate route in Barangay Kalunasan is not accessible to these types of vehicles, Romarate said.

Romarate said the Dansalan siblings, accompanied by their aunt, took a habal-habal (motorcycle for hire) from their residence in barangay Sudlon to get to the zoo. But this mode of transport was unsafe due to the numerous potholes along the way, he said.

Romarate said they appealed to the Beverly Hills homeowners’ association to reopen the road but so far there has been no response.

He said they could only hope that this Year of the Monkey would bring investors willing to develop CCZ into a world class zoo. Aside from Conga, other monkey attractions in the zoo are six macaques.

But only two of the macaques are currently allowed to interact with visitors as the four others are aggressive and territorial since this is their mating season, Romarate said.