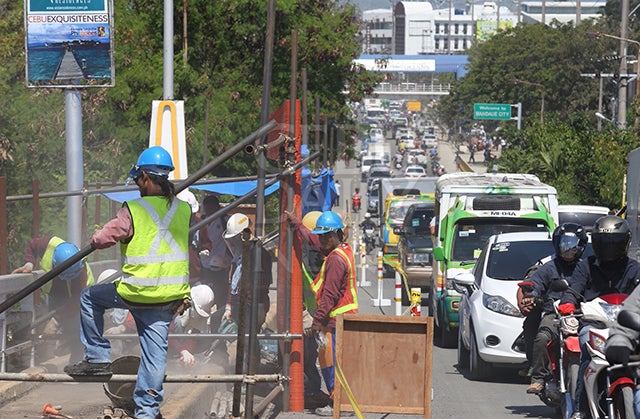 Dianne Rose Gador usually takes a 10-minute ride to reach the University of Cebu Lapu-Lapu-Mandaue (UCLM)  campus where she is taking an education course.

But yesterday, she walked from her home at the end of the old Mandaue-Mactan Bridge on the Lapu-Lapu City side to reach her school at the other end of the bridge on the Mandaue City side so she won’t be late for her 10:30 a.m. class.

“I heard news of the bridge repair.  Traffic on the bridge is barely moving and I know that I will be late for school if I take a jeepney ride so I decided to just walk instead. It was already hot but I had no other choice,” she said.

Congestion on the first  bridge and at the Marcelo Fernan Bridge started to build up last Monday night.

There are ongoing concreting works at D.M. Cortes Street (formerly known as Plaridel Street) which connects the two bridges. The first bridge is also undergoing repair, although this has been deferred for a week.

Glen Antigua, head of the Traffic Enforcement Agency of Mandaue (TEAM),  said congestion worsened between 6 a.m. and 8 a.m. yesterday, when students and employees started to head to schools and offices, respectively.

TEAM executive director Florentino Nimor, Jr. admitted that the traffic situation was “chaotic” in the early hours but it normalized at noon yesterday.

“We have no problem for those going from Mandaue City to Cebu City because we have many access roads like B.B. Cabahug and M.C. Briones Streets. What is difficult is the traffic coming from Lapu-Lapu City,” he said.

Both lanes of the Mandaue-Mactan Bridge will be open starting today.

“They’re not problematic. There were advisories but it seems as if no one was informed about it,” said Engr. Joselito Sayson, head of the construction division of the regional Department of Public Works and Highways (DPWH 7).

DPWH regional director Ador Canlas called Mayors Jonas Cortes of Mandaue City and Paz Radaza of Lapu-Lapu City, the traffic chiefs of the two cities and the project contractors to an emergency meeting to re-discuss their options.

“We have to identify the cause of the traffic jam and the bottlenecks,” said Sayson.

He said traffic adjustments may have to be implemented after their meeting but road concreting and bridge repair works should continue as scheduled.

Repair works are expected to continue until July.  Work is scheduled from 9 p.m. to 4 a.m. daily.

PB Obial Construction, which is working on the D.M. Cortes Road concreting, already closed at least 400 meters of the inner lane of the road’s south bound lane due to the ongoing road digging and removal of existing asphalt overlay.

Congestion worsened after a prime mover broke down while traversing UN Avenue from Lapu-Lapu City at 5:56 a.m.

The truck which was headed to Mandaue City occupied one lane of UN Avenue for 22 minutes before it was finally towed.

At least four more minor vehicular accidents were reported in parts of Mandaue City between 6 a.m. and 10 a.m.

At 7 a.m. yesterday, the DPWH decided to again open the bridge’s Lapu-Lapu City-bound lane to decongest traffic in the area.

Despite the re-opening of the bridge’s Lapu-Lapu-bound lane, congestion remained heavy in the two cities due to the ongoing road works along D.M. Cortes Street.

Read Next
Gov’t nurse suspended for tampering OR