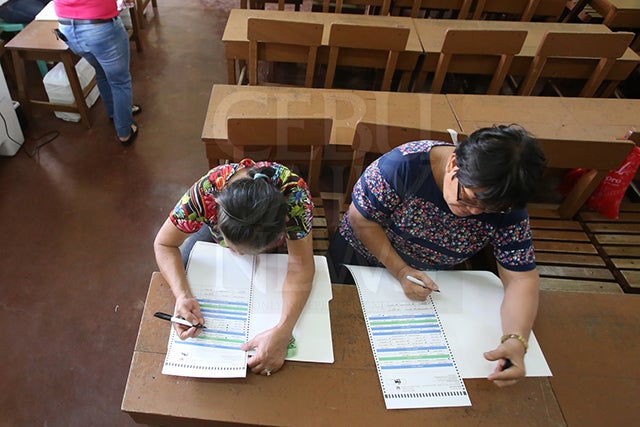 Norma Maura (left) and her sister Laura fill up their ballots during the mock elections at the Mabolo Elementary School. (CDN PHOTO/JUNJIE MENDOZA)

While election officials described the mock elections in some pilot areas in Cebu as a success, they were unable to transmit the results to the national board of canvassers as of 5 p.m. yesterday.

Cebu Provincial election supervisor Lionel Marco Castillano said they experienced  signal problems during the transmission of the results from barangay Kabutongan in Santander town, southern Cebu to the canvassing area at the municipal hall.

The village is 8 km from the town proper, he said.

It took more than two hours from the time the polls closed for the Municipal Board of Canvassers (MBOC) to transmit the consolidated results to the Comelec office in Cebu province.

On the other hand, the mock election in barangay Poblacion of Santander town went without a hitch when the transmission was completed at past 2 p.m., Castillano said.

Municipal election officer Vivian Canillo said they were unable to find a signal for the Broadband Global Access Network (BGAN) in barangay Cabutongan.

She blamed this on the dense forest in the area. The vote-counting machine used in the barangay had to be brought to the MBOC in barangay Poblacion instead.

Results from the Central School were successfully transmitted to the MBOC by 12:50 p.m., Canillo said.

At 2:35 p.m., the Comelec in the province successfully received the MBOC transmission.

“The BGAN is used in remote areas where mobile phone signals from the three known networks are not present,” he said.

It uses signals from a telecommunications company in Singapore.

In order for the BGAN device to properly work, Castillano said there should be no obstruction in the direction it is facing.

He said it should be facing 121° east-southeast and should have a 60° incline.

Castillano said what happened in Cabutongan is not indicative of what will happen on Election Day.

He said majority of the polling precincts by then will be using signals from Globe, Sun and Smart networks.

Castillano said the BGAN is only used in remote places where these networks have no service.

Castillano also said the problem was on the Manila side of the result transmissions system.

He said he already received  text messages from the municipal election officer showing that the result matched with the manual counting.

He said some ballots were not accepted by the vote-counting machine because they were not properly shaded by the participants.

“The overall assessment is that there was no problem. The machines didn’t accept some ballots because they were not properly marked. By rejecting the ballot, the machine gives one the opportunity to correct their votes,” Sarno said.

The teachers of Mabolo Elementary School acted as the Board of Elections Inspectors (BEI).

They sent the data to Cebu City Social Hall at 12:30 p.m. where the board of canvassers is located.

Sarno said the two schools that took part in the mock elections were able to transmit the results a few minutes after the end of the polling at noon.

Sarno said ballots that were “over-voted” will be marked invalid by the machine.

He told reporters that there was no report of vote-counting machines breaking down and experiencing technical problems.

Read Next
Comelec Cebu supervisor to transfer to Negros