Two former mayors of Talisay City, 9 City Hall department heads and two former employees were directed to refund the city government a total of P29.4 million that was used for a computerization project in 2001 and the purchase of allegedly overpriced liquid fertilizers in 2005 that were disallowed by the Commission on Audit (COA).

Talisay City Mayor Johnny de los Reyes, in a letter dated Feb. 15,  asked former mayor Eduardo Gullas to immediately pay  P8.5 million to the city  while the balance of P20.9 million will have to be shared by the other city officials,  including former mayor and now City Councilor Socrates Fernandez.

The mayor, at the same time, directed City Treasurer Emma Macuto and City Accountant Viluzminda Villarente to “withhold the payment of the salaries or any amount due” to  all other officials still working for the city government.

Ironically, Macuto and Villarente are among the city officials involved in the case and will now have to implement the order withholding the release of their own salaries.

“In case the persons so named in said COE (COA Order of Execution) are no longer in government service, the COA directed my office to cause the collection or settlement of the same directly from them,” said De los Reyes in the letter sent to Gullas and the other concerned officials, copies of which were obtained by Cebu Daily News.

De los Reyes said he was giving  the 13 former and current city officials 15 days to comply with the demand letter.

“If they will not send a reply after 15 days since they received the last demand letter, we will submit all the documents we gathered to COA regional office.  It will be up to COA Manila to decide on what to do with them,” De los Reyes said. 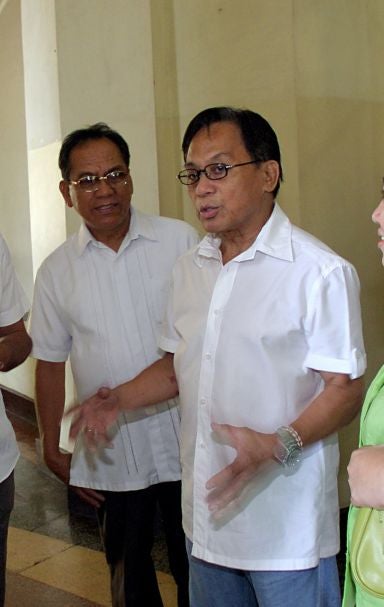 Gullas, in a press statement yesterday,  indicated he would not heed the demand letter as he has a pending case before the Supreme Court questioning COA’s decision to disallow the computerization project that was implemented when he was mayor in 2001.

“Let us forgive Mayor (D)e los Reyes for writing this letter, assuming that he knew what it contained. It is not easy to do things we are incompetent of. Let us, however, pray that the mayor may be enlightened and that his lawyer should advise him that the Supreme Court has taken jurisdiction over the case,” said Gullas.

Gullas, who as congressman of the first congressional district authored the law that converted Talisay into a city in 2000 and became its first mayor in 2001,  is now running anew for city mayor against De los Reyes, who is seeking reelection in the May elections. Gullas ran for the post in 2013 but lost to De los Reyes.

Gullas said he was “thankful” to  De los Reyes for writing the demand letter, as it gave him the “opportunity to prove and show to the Supreme Court of the extreme urgency for it to rule on our petition for a TRO (temporary restraining order) or Status Quo Order.”

Two others issued with the same letter are no longer in the city government’s employ, namely, Aurora Econg and Rey Lumapas, the city administrator and a member of the city’s Bids and Awards Committee (PBAC), respectively, when Gullas was mayor.

De los Reyes said could not defer the issuance of the demand letter on the basis of the department heads’ claim that they have a pending petition for a TRO before the Supreme Court since there is no ruling yet from the High Tribunal.

He added that while he “pitied” the concerned department heads, they would only be able to keep half of their salaries starting on Feb. 29.

He said he has to issue a demand letter since COA had already sent him a “Notice of Finality of Decision” in August last year,  informing him of the decision to order the payment of the disallowed amount.

Allegations over the overpriced computerization project were raised in September 2007, during which time COA found alleged deficiencies in the P26.988-million

But on Dec. 21, 2004, COA questioned the computerization as it was not backed by an ordinance, adding that the executive order (EO) issued by Gullas, which realigned the city’s savings to fund the project,  was not enough basis.
Fernandez, who succeeded Gullas in 2004, also issued three EOs realigning amounts from the city’s general fund and its 20 percent development fund to pay for the project.

On Feb. 27, 2006, COA-Central Visayas issued four notices of suspension of payments and another in April 2007 when the city refused to comply with the notices.

As to the liquid fertilizer, the COA, on Nov. 8, 2006, found that each of the 3,333 bottles of liquid fertilizer bought by the city from Manila-based supplier Gracias Industries in 2005 was overpriced by P711.90.

COA said the city paid P900 for each bottle of fertilizer when the actual cost, based on its own canvass, was only P171 per bottle.  Thus, COA disallowed P2,372,762.70 of the total purchase price.

State auditors also discovered discrepancies in the bidding process and rejected the city government’s argument that the Department of Agriculture should be held liable since it provided the funds for the project.

The COA said that since it was Talisay City that implemented the project, it in effect became the “conspirators since they not only allowed the manipulation of the bidding which resulted to the overpriced transaction, they were also the ones who paid the winning bidder.”

Read Next
Hot and sunny again this weekend