‘WE WILL NOT PAY’ 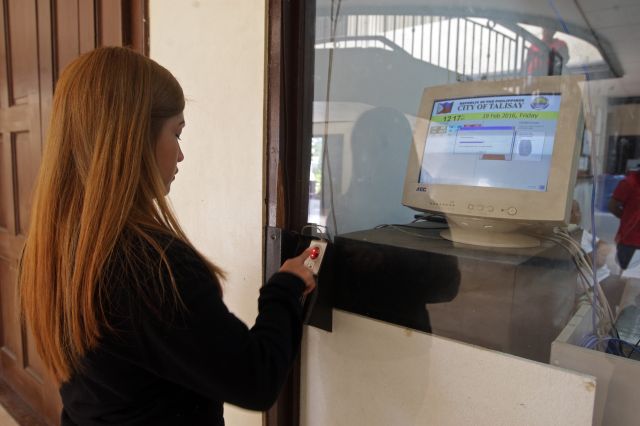 A Talisay City Hall employee uses the biometric finger scanner for her daily attendance. This is the same equipment that was part of the computerization program implemented in 2011 and was later disallowed by the Commission on Audit. (CDN PHOTO/TONEE DESPOJO)

Some Talisay City officials who were ordered to return the P29.4 million used to fund a City Hall computerization project and to buy fertilizers over a decade ago will defy the demand letter issued by Mayor Johnny de los Reyes.

Former mayor and now Councilor Socrates “Soc” Fernandez said he and department heads subject to the demand letter should not pay the amount demanded from them since paying will be tantamount to admitting to the allegation of wrongdoing thrown at them.

Fernandez maintained they followed proper procedures in the bidding of the city’s computerization project, as well as the purchase of over 3,000 bottles of fertilizer, which COA claimed to have been overpriced by over P700 per bottle.

Fernandez, in a phone interview yesterday, added they could not be compelled to make a refund since the Supreme Court has still to resolve their petition for a temporary restraining order on the COA’s ruling that disallowed the two projects.

He said De los Reyes should have waited for the SC’s decision on their petition before he issued a memorandum that ordered the city treasurer’s office to withhold the salaries of those involved in the implementation of the city’s computerization program in 2001 and the purchase of liquid fertilizers in 2005.

Both projects were disallowed with finality by the Commission on Audit (COA) in October 2015, which became the basis for De los Reyes to issue a letter last Feb. 15 demanding the return of the funds from the projects’ implementers, namely, former city mayors Eduardo Gullas and Fernandez; and 11 others – 9 department heads still in city government service and two others who have since retired.

The same position was also taken by Gullas who, in a statement on Thursday, said he could not be made to pay a refund, which was about of P8 million of the total disallowed amount, in view of the pending petition before the SC.

Fernandez said Delos Reyes might not have sought a legal opinion before he issued the memorandum directing the city accountant and the city treasurer to “withhold the payment of the salaries or any amount due” to all other officials still working for the city government.

City Treasurer Emma Macuto and City Accountant Viluzminda Villarante are among the nine department heads involved in the case. Both could not be reached for comment as to whether or not they would implement the order withholding the release of their own salaries and that of their fellow department heads.

“I am not a lawyer but I think (De los Reyes) should not have done that… An accused person is presumed innocent until proven guilty,” Fernandez said.
Vicente and Araw-Araw, in separate interviews yesterday, also believed that a decision on their pending appeal before SC should take precedence over the mayor’s demand letter and his memorandum to withhold half of the monthly pay of the concerned department heads starting on Feb. 29.

“There should be specific amount (of disallowance) and proper documents to show why this amount is asked. He (De los Reyes) can’t just demand for half of our salary,” Vicente said.

Vicente said he has yet to receive De los Reyes’ demand letter that was supposedly addressed to him.

Vicente added he could not let the city government take half of his monthly pay of P40,000 since he has a family to support.

It was in 2001 when Vicente said he signed the purchase of the computer items as the chairman of the city’s technical working group.

“Those items went through the bidding process. (It was not) a ghost project,” Vicente said.

Araw-Araw also argued they should not be made to shoulder the cost of the computerization project since the SC still has to decide if he and the others should be made liable for any irregularity.

The COA disallowed the computerization program, as the project was implemented without a corresponding appropriation measure approved by the city council. It said the executive order (EO) issued by then Mayor Gullas, which allowed the project to be funded using the city’s savings, was not valid.

Fernandez, who succeeded Gullas in 2004, and his administration’s city council later backed Gullas’ EO but this was also rejected by COA, saying that the Gullas EO was invalid to begin with.

According to Araw-Araw, they could not do anything about the mayor’s decision to issue a demand letter “but our stand is to wait for (the) SC (ruling).”

Araw-Araw, then the city’s planning officer, said he received four computers on behalf of his office. But the four computers were decommissioned in 2008 because they were outdated and no longer functional, he said.

Vicente and Araw-Araw said they have no idea where the decommissioned computers were kept, except that these were turned over to the city’s general services operations office for disposal.

A printing machine for receipts bought under the computerization program is still kept at the  city engineering office but not been in use for a long time.  But another item,  the biometrics for employees’ daily attendance, is still in use.

Galardo, on the other hand, refused to comment on the issue. “For now, I don’t want to give a comment. I might say something wrong. Thank you for the concern,” he told Cebu Daily News yesterday.

Viluzminda and Mabunay, sought for comment, were both out of their offices yesterday reportedly attending a seminar, according to their respective staff; while Cabrera was out of office to attend the burial of a relative of her staff.

Bacasmas was also out of his office, reportedly also attending a meeting called by the Department of Public Works and Highways (DPWH).

De los Reyes, in a separate interview yesterday, reiterated he was only doing his job since he was directed by COA to implement its order to demand a refund from the 13 present and former city officials.

He said he would stand by his demand for the 13 officials to refund the city, unless they can show him an SC ruling to the contrary.

Fernandez and the nine department heads filed their petition before the SC last year after receiving the information on the finality of decision of COA on the disallowed amount.

Fernandez said COA should have also waited for the SC to decide on their petition before it issued the refund order.

“The COA is not infallible. There is a court. COA is not a court,” he said.