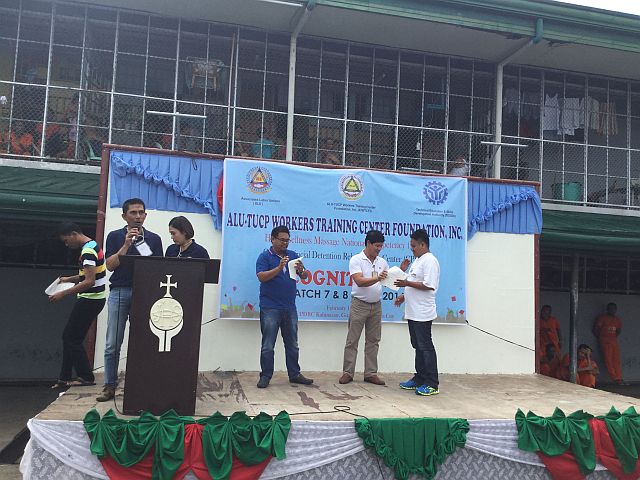 Inmates (above) receive their certificates for undergoing the Hilot Wellness Massage course during the recognition ceremony at the CPDRC. (CDN PHOTO/JHUNNEX NAPALLACAN)

At least 50 inmates of the Cebu Provincial Detention and Rehabilitation Center (CPDRC) are given hope for a better future despite the seriousness of the charges they are facing.

With their new skills in “hilot”, they can find better jobs if ever they will be freed from jail, said Philip Llaguno.

Llaguno, 33, from Lamac, Consolacion, was one of the 50 inmates who finished the Hilot Wellness Massage NC II, a 15-day training course implemented by the Associated Labor Unions-Trade Union Congress of the Philippines (ALU-TUCP) Workers’ Training Center Foundation Inc.

The foundation worked together with the Technical Education and Skills Development Authority (TESDA) for the implementation of the project.

As the inmates walked toward the stage to receive their certificates, their fellow inmates went out of their cells and applauded them.

“Dako kaayo nakong kalipay kay nahatagan mi ning maong skills bisan kami naa sulod sa prisohan. Amo ning magamit dinhi ug pohon kon makagawas mi, so makakita mi’g trabaho,” Llaguno said.
(I am happy that the other inmates and I are given the chance to learn  new skills even if we are inside the jail. We can use these skills in the future to find work when we get out of jail.) 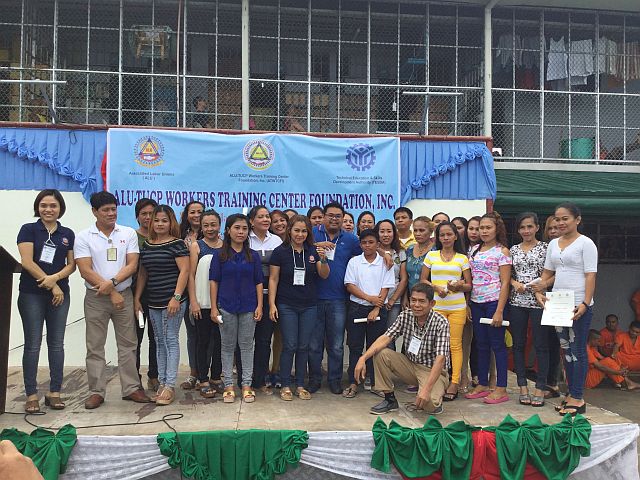 Some of the inmates take time for a group photo at the stage during last Friday’s ceremony. (CDN PHOTO/JHUNNEX NAPALLACAN)

Llaguno was then 26 years old when he was arrested in an alleged drug buy-bust operation in his house in Lamac Consolacion last 2009.

Llaguno claimed he was arrested after authorities allegedly planted the illegal drugs in his house. He is charged for violation of Section 5 of the Comprehensive

Dangerous Drugs Act, which has life imprisonment as the maximum penalty.

Despite his situation, Llaguno said he has never lost hope that one day he will be freed and will  resume to live a normal life outside of prison.

He said he can find a job with his knowledge about “hilot.”

Inside the jail, Llaguno is the chairman of the pastoral council, which organizes Masses, Bible sharing and other  religious activities.

Lauro Vergara, 33, from Talavera, Toledo City, who is also facing drug charges, said he is also expecting to be acquitted soon as he also claimed that the evidence against him was planted during a raid last January 2014.

When that happens, he said, he will have a decent job because of his skills in hilot.

Vergara has a 5-year-old daughter, but he said he is expecting another baby because his wife, who constantly visits him in prison, is now pregnant.

He also wishes that the hearing of his case will be fast-tracked.

He said since his arrest last January 2014, he was arraigned only last month and the pre-trial will be on April.

Vergara said he could not demand to fast-track the proceedings of his case because he cannot afford to hire a private lawyer. He only tapped the services of a PAO lawyer.

Llaguno, Vergara and other inmates who finished the Hilot wellness massage course are now applying their skills on fellow inmates.

Most of the time, they do hilot for free. But sometimes, they got paid small amounts like P10, P20 and P50.

“Usahay hatagan mi og sabon (Sometimes, they would give us a bar of soap as payment),” said Vergara.

But at least, they said, their fellow inmates have benefited also with the hilot skills they acquired from the 200-hour training which lasted for 15 days.