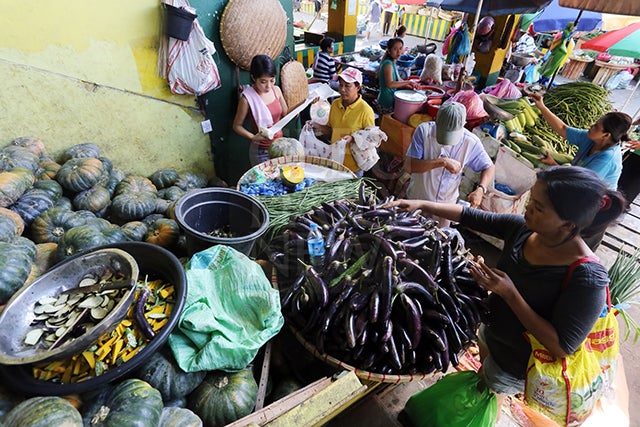 Prices of some vegetables in Carbon Market have increased, but the Agriculturist’s Office of both Cebu City and Cebu Province said the El Nino has not affected the farmers yet. (CDN PHOTO/JUNJIE MENDOZA)

Prices of some vegetables like okra, string beans and eggplants have increased in Cebu City markets just this month.

In Carbon Market, the price of eggplants is now P45 per kilo compared to P30 per kilo in previous weeks.

From P30-P40 per kilo, she said string beans and okra prices have also climbed to as much as P50-P60 per kilo.

She said she didn’t know why the prices went up. But the prices change every night.

City Agriculturist Joelito Baclayon said the price increase indicate that farm products from outside Cebu City may have been affected by the dry spell.

The supply of vegetables coming from Cebu City’s upland barangays, however, remained unaffected.

Baclayon said though that they fear supply will decline in the coming weeks or months.

“The El Niño has no effect in our mountains right now. There have been rains in December and January. In fact, we have noted an oversupply of our leafy vegetables,” he told CDN.

But he said the produce from the city’s 32 upland barangays comprise only 30 percent of the vegetables that reach the city’s different markets.

Even with the price increase, America said a lot of people are still buying vegetables.

According to City Markets Administrator Raquel Arce, the price of other vegetables in the city’s markets have either remained the same or even decreased like ginger.

She said from P50 per kilo last week, ginger now costs P38 per kilo due to the abundant supply.

He said they will start construction of 35 units of water catchment facilities in six different barangays by the first week of March.

Meanwhile, the Cebu Provincial government is encouraging the public to plant in their own backyards to counter the anticipated rise in vegetable prices during summer.

Dr. Roldan Saragena, Cebu provincial agriculturist, said that sacks and basins can be used as pots to plant vegetables in.

These include tomatoes, bell pepper, bitter gourd, okra, eggplant, and tomato, among others.

“These are the vegetables common among farms in Cebu. They are also basic needs in the kitchen and at the same time, have a high demand in the market,” he said yesterday.

The Cebu Provincial Agriculturist’s Office is distributing free vegetable seeds to farmers as a response to the effects of the El Niño phenomenon, but non-farmers may also avail of them.

Saragena said he expects prices to rise during summer, with the heat intensified due to El Niño.

State weather bureau Pagasa has predicted that there will be no more rains starting next month.

He said that those who don’t charge excessively during summer are farmers whose lands have good irrigation system or are near water sources.

“As far as I know, 70 to 80 percent of farmlands in Carcar City have irrigation through the NIA (National Irrigation Authority). They also have dams. Some mountain barangays in Argao also have natural water sources, even in Oslob,” Saragena said.

He said he hasn’t received reports from towns on price hike due to lack of yield.

Saragena said that the agri-business division of his office conducts weekly monitoring on vegetable prices by visiting stalls in Carbon Market, Cebu City and the Mantalongon Trade Center in Dalaguete, southern Cebu.

Some town mayors in the province also have not received any reports of a decrease in yield lately.

In Dalaguete, southern Cebu, known as the  vegetable basket of the province, Mayor Ronald Allan Cesante said water levels have started decreasing since last month but the situation isn’t alarming yet.

Farmers’ yield, he said, has fared better than in previous months.

Mantalongon in Dalaguete supplies 30 percent of vegetables and crops sold at the Carbon Market in Cebu City.

Medellin Mayor Ricky Ramirez said that it has been raining in his town recently and that he has not gotten feedback from farmers regarding a dip in yield.

Earlier this month, Saragena met with all local agriculturists in the province to talk about the situation in their jurisdictions amidst the El Niño.

During that time, he said he did not get any feedback regarding major damage on crops.

“The farmers are more concerned about where to get good quality corn seeds for the first cropping season this coming May,” said Saragena.

In anticipation of the El Niño’s effects in the coming months, the Capitol has set aside P3.4 million for water catchment and water impounding facilities.

Dumanjug, Ginatilan, and Dalaguete will receive one water catchment facility each while Boljoon, Tuburan, Tabuelan, Liloan, and Carmen will eac get a water impounding facility.

Saragena said they are in the process of validating sites suitable to house the facilities.