Grandson rues failure to save grandpa in Sambag II fire 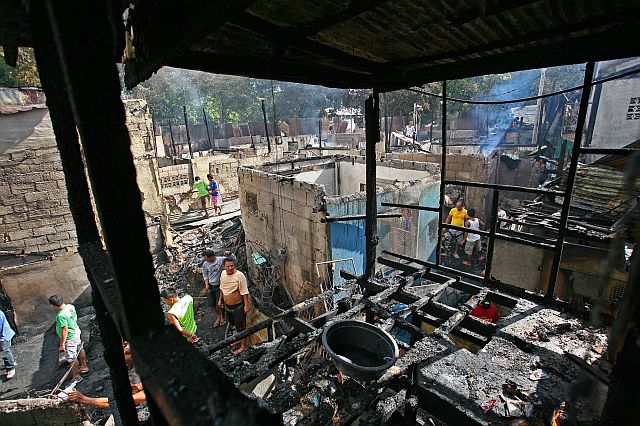 Residents of Sitio Kawayan in Barangay Sambag II look for things that they can still use or sell in the aftermath of a fire that destroyed 24 houses on the first day of Fire Prevention Month. (CDN PHOTO)

HIS screams for help were the last thing that his grandson heard from him.

Eleuterio Jamiro, 85, died when he got trapped inside his room while fire consumed his house and 23 others in Sitio Kawayan, Barangay Sambag II, Cebu City last Tuesday night.

Jovanni, his grandson, told Cebu Daily News that he tried everything to open the door of Jamiro’s room.

He said he came from an errand when he saw that the room was on fire. Jamiro, a diabetic, could hardly walk.

Whenever he would go out for a stroll, he would padlock the room),” Jovanni said.

Jamiro’s charred remains were discovered on the floor inside his room more than two hours after the blaze was controlled.

The incident, reported at 9:38 p.m. on Tuesday and placed under control about 15 minutes later, marked the first day of Fire Prevention Month.

Some 41 families, or 132 individuals, were left homeless. They are temporarily housed in the barangay gym.

Chief Insp. Rogelio Bongabong, Cebu City fire marshal, said an unattended lamp or candle that might have been toppled in Jamiro’s room which could have sparked the fire.

Jamiro’s room was situated on the ground floor of their two-story house. Jovanni said they haven’t had electricity for about a year.

Bongabong said it took them a while finding the body of the victim because the fire scene was very dark. The remains were brought to St. Francis Funeral Homes.

Residents of the highly congested community scampered for a way out when fire broke out.

Rogelia Manolo, one of the affected residents, said they were afraid of being trapped.

Barangay Sambag II is among the 79 congested areas in Cebu City that have been recommended by the Bureau of Fire Protection Central Visayas (BFP-7) for re-blocking.

“They can rebuild but by that time, the residents have to conform to specifications for wider pathways just in case another fire hits the area,” said Belarmino.