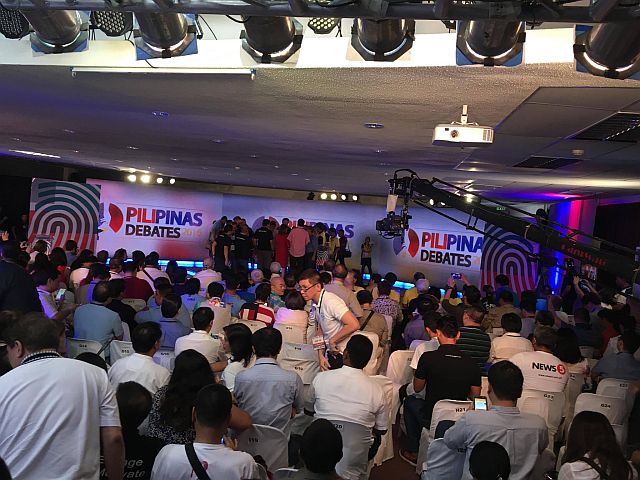 Nearly 2,000 people show up for the Visayas leg of the presidential debate, held Sunday at UP Cebu. (CONTRIBUTED PHOTO)

LOCAL businessmen found the Visayas leg of the series of presidential debates “entertaining” and “revealing” in terms of the candidates’ characters, but lacking in depth.

“None of the candidates are wrong in their platforms. But the thing is the business sector is not looking for promises. More importantly, what we are waiting for are the SMART solutions or the achievable measures,” Philip Tan, former president of the Mandaue Chamber of Commerce and Industry (MCCI), said.

SMART is a business acronym that stands for specific, measurable, achievable, relevant, and time-bound, Tan said.

“Any candidate that can answer that will be the one voted for,” he added.

Melanie Ng, president of the Cebu Chamber of Commerce and Industry (CCCI), said it would have been better if “discussion was centered on issues besetting the country,” rather than on the candidates’ personalities.

“I just wish that the level of debate/discussion was on a higher plane:  It was clear that everyone wanted to do demolition jobs on each other as the main debate technique, particularly (Vice President Jejomar) Binay and (Davao City Mayor Rodrigo) Duterte, although (Sen. Grace) Poe and (former DILG secretary Mar)

“For the first time ever, there was truth very apparent beneath the campaign and political rhetoric. Unfortunately, the overall level of debate to my mind was very disappointing.  I struggled to stay tuned to the TV.  To my mind, it was very ugly – but at least the truth is bubbling to the surface,” he added, referring to each candidate’s personality that surfaced during the debate.

All three business leaders pointed out that no specific economic concern, such as infrastructure and education, was discussed.

“The debate was more geared towards the general, more emotional, viewers. The exchanges were emotional, but not so much talk was on what can be concretely done and actualized in the Philippines,” said Tan.

One of the overreaching issues during the debate was corruption, but not much was heard about the actions the candidates’ could take to eliminate corruption in government and at the same time, translate this into business confidence, the executive pointed out.

“Dili ra unta to tanan promises (hopefully, those are not just promises). How we are going to make this achievable should have been said in the debate,” he added.

Ng, who watched the debate live, also said that a look into each of the candidates’ plans for infrastructure would have swayed votes into their favor.

But for what the debate lacked in terms of concretized plans, it made up in revealing the personality of each of the candidates.