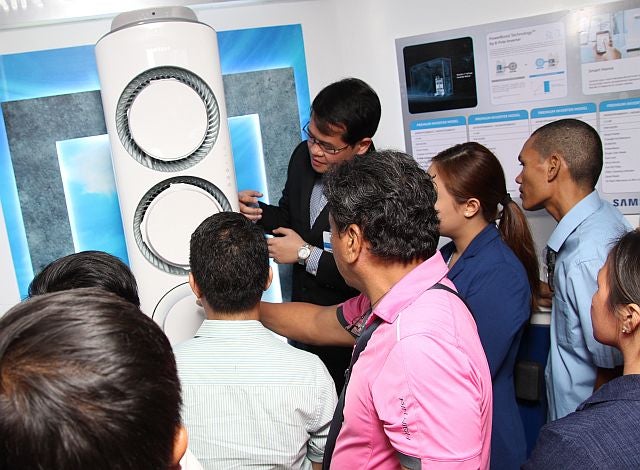 A Samsung executive shows the features of new air conditioning products during a product launch in Cebu. (CONTRIBUTED)

“R&D (research and development) and design play a key role in how we develop our products as we’re always focused on delivering cutting-edge technology and ensuring the products we deliver are highly efficient,” Mark Salvador, head of Samsung Digital Air Solutions, said in a statement.

The DVM S Eco 14HP is a new side discharge VRF air-conditioner engineered to deliver a single outdoor unit solution for apartment and office buildings while the DVM S 30HP features revolutionary features to boost performance, such as a new Super Inverter Scroll Compressor with flash injection technology and an optimized bypass valve location to increase heating capacity by 29 percent.

The DVM Chiller unites the strengths of air-source chiller and VRF systems to provide a high performance, energy-efficient unit.

By reducing the system refrigerant levels significantly more than a conventional chiller, the Samsung DVM Chiller not only complies with current 2015 EU refrigerant quota levels but also adheres to the further upcoming reduction in levels (35 percent in 2018).

The Cassette air-conditioning unit, meanwhile, features a groundbreaking bladeless circular design that allows for even cooling with minimal loss in air flow.

With a temperature deviation of less than 0.6 degrees Celsius across an area spanning a diameter of 9.3 meters, the new 360 Cassette from Samsung provides increased power efficiency without producing a cold draft, delivering an optimal cooling performance.