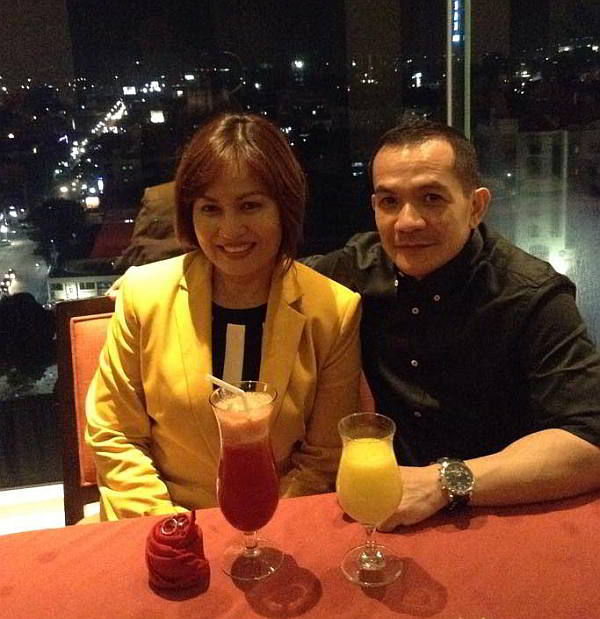 DAMAGED TIES. The Islamic marriage of Sanchez and Castro has been declared null and void.. (CONTRIBUTED PHOTO)

Suspended Cebu City Asst. Prosecutor Mary Ann Castro requested a court to appoint her as the administrator of all the properties owned by her estranged husband, Leodegreco Sanchez.

Her petition came as the Imam who officiated the wedding ceremony of Sanchez and Castro declared their union null and void since the two failed to show any interest to undergo conversion to Islam.

Castro and Sanchez got married in an Islamic ceremony at Harold’s Hotel in Cebu City on Aug. 18 last year, a day after Sanchez, who adopted the name Mustafa, was released from drug rehabilitation and treatment.

In a resolution signed on April 3, Imam Najeeb Razul said the Nikah (marriage) entered into by both Sanchez and Castro had been found “irregular and contemptuous” as both failed to show any interest in becoming Muslims.

“Despite repeated invitation and admonition, both did not hearken the call and has never attended any Sallah (prayer) and programs of the congregation and had never showed interest like any other Muslim,” he said in his resolution.

Copies of the resolution were furnished the National Commission on Muslim Filipinos and the Philippine Statistics Authority in Central Visayas, and the local civil registrar in Cebu City.

Razul said the Council of Elders, which he chaired, conducted an inquiry and found that the marriage was purely for convenience.

In her petition filed at the Shari’a District Court in Marawi City, the feisty prosecutor said Sanchez, the son of late Cebu vice governor Leodegreco Sanchez, is incapable of managing the properties due to continuous illegal drug problems.

“On the basis of the medical findings of expert professionals, Mr. Sanchez is ‘no longer in his full control of mental and psychological faculties. The properties, real and personal, will likely diminish, if not entirely perish, unless an administratrix is appointed by this honorable court,” Castro stated in her petition.

Among the properties Castro wants to manage are Lactobiotics Worldwide Corp.; three parcels of land in Barangays Calawisan in Lapu-Lapu City and Barangays Pardo and Guadalupe in Cebu City; a Jaguar motorcycle; a black Ford Wildtrak; 14 other vehicles; radio stations DYDD, DYHH, DYZZ; and other properties owned by the Sanchez family abroad.

Sought for comment, Sanchez said the petition filed by Castro proved that the prosecutor is just after his family’s properties.

“Nag-apas lang gyud na siya sa among properties. (She just wants to take control of our properties). At first, I thought I had feelings for her. But I later on found out that she’s after something else,” he said.

Sanchez said all his properties are inherited from his parents and Castro couldn’t simply take them since they are not conjugal properties.

Asked if he is still using drugs, Sanchez said, “In her heart, she (Castro) knows that I can’t do that.” Sanchez underwent drug rehabilitation 19 times.

When Sanchez stepped out of the rehabilitation center, Castro said her husband tested “negative” for illegal drugs.

But their relationship soured after two months, with Castro saying she saw Sanchez sniffing drugs again in a farm in Tuburan, northwest Cebu.

In a sworn statement, Sanchez said Castro insisted that her name be annotated in all his family properties.

“Only a week went by when I noticed that she wanted my tax declarations and titles to my properties and told me that it should be part of the dowry because it was a Muslim wedding,” he said.

PB Member Sanchez said her brother is still married to his first wife.