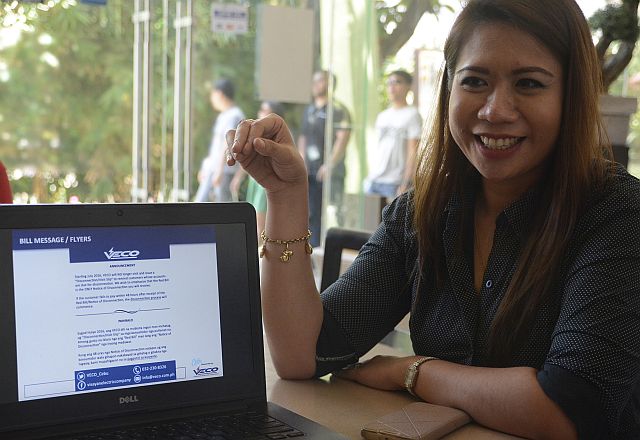 Veco said that they will implement their “no visit policy” for its residential customers starting July 1.

With the implementation of the “no visit policy,” Veco personnel will no longer make phone calls to customers to remind them of their obligation to pay their electricity bills.

According to Bienvenido Saniel III, manager of Veco’s Revenue Management Department, the company has been practicing the “visit first” policy since 2004, wherein a customer who fails to pay within 48 hours after receipt of the red bill will be given a white slip prior to disconnection.

“The white slip that we give them is an initiative of Veco to give them another chance to pay. Essentially, they have another one or two days extension,” he said.

However, Veco believes that it is high time to implement the “no visit policy” to change the mindset of its delinquent customers and to reinforce its message that the red bill is the real notice of disconnection.

“Isa ra jud atong (we have only one) message — we want to change the mindset of our customers that the official notice of disconnection is the (red) bill and not the small piece of paper. Ayaw na mo paghuwat atong puti. Kadtong red, mao na to (Don’t wait for the white one. The red is the real one (disconnection),” Saniel said.

Saniel explained that the change in the usual procedure is not new as this was the practice before Aboitiz took over the company in 2004.

Jill Verallo, Veco Reputation Enhancement Department head, said the white slip is merely an add-on and is not required under the rules of the Energy Regulatory Commission (ERC).

Saniel urges customers to settle their electricity bills on time. He emphasized that overdue bills should be settled immediately upon receipt of the red bill to avoid disconnection.