AN ACT OF FAITH 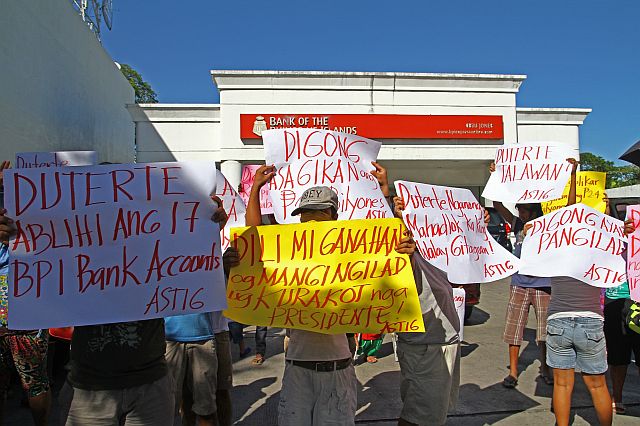 Exactly a week to go before the polls on May 9, the Catholic Bishops’ Conference of the Philippines (CBCP) appealed to all Catholic voters to shun “a candidate who takes positions that are not only politically precarious but worse, morally reprehensible” and to cast their votes as an act, not only of citizenship, but also as a public declaration of faith.

“There is a fundamental difference between right and wrong, and not everything is fair game in politics. A choice for a candidate who takes positions that are not only politically precarious but worse, morally reprehensible, cannot and should not be made by the Catholic faithful and those who take their allegiance to Christ and his Kingship seriously,” CBCP President and Lingayen-Dagupan Archbishop Socrates Villegas said in a strongly worded pastoral letter dated May 1.

“Duterte is the candidate being alluded to by CBCP. He is morally bankrupt, a self-confessed murderer and a certified liar on hidden bank accounts,” said Barcenas.

“All the other candidates could not be alluded to because only Duterte has advocated summary executions and that he would kill thousands of criminals in order to solve criminality in the country,” he said.

On the morality issues, Barcenas said that Duterte has admitted to having two wives and two mistresses and that he will even bring his mistresses to Malacañang.

“Clearly, Duterte is not only a menace to our society but an anathema to our Christian culture which upholds the sanctity of human rights,” Barcenas added.

Cebu Provincial Board Member Arleigh Sitoy, a staunch supporter of Duterte, was quick to defend the PDP-Laban presidential bet, saying that Duterte isn’t any of the things described by the CBCP.

Sitoy said Duterte is a man who “tells the truth.”

Sitoy also cautioned the Church from getting involved in politics as this, he said, will only “confuse the people.”

Transportation Secretary and Liberal Party president Joseph Emilio Abaya, in a text message to CDN, said, “It is expected for the Catholic Church to urge its faithful to vote according to its values.”

He said that while there is a separation of Church and State in our country, “We Filipinos take our religion very seriously and the values it promotes: honesty, respect, dignity and love of family.”

“We share in the Church’s call for a close examination of the candidates, their values, their platforms and most importantly, where they intend to take our country not just in terms of economic growth but also our enrichment as a people. We want leaders to bring out the best in us, not the worst,” Abaya said.

For his part, Cebu City Mayor Michael Rama, who is allied with United Nationalist Alliance (UNA) of presidential candidate Vice President Jejomar Binay, said that the CBCP is “always entitled to what they wish but at the end of the day, it (voting) will always be on the basis of (the voter’s) conscience and conviction.”

CDN tried to reach the camp of Galing at Puso standard bearer Senator Grace Poe, but no statement from her camp was available as of this writing.

“One cannot proclaim Christ as King and at the same time accept the governance of one whose thoughts, speech and demeanor are diametrically opposed to the demands of submission to the Lordship of Jesus Christ,” the CBCP statement read.

“The desire for change is understandable. Our people have suffered from incompetence and indifference. But this cannot take the form of supporting a candidate whose speech and actions, whose plans and projects, show scant regard for the rights of all, who has openly declared indifference if not dislike and disregard for the Church specially her moral teachings,” Villegas said.

By now, Villegas said Filipinos already have an idea about who the candidates are, what they represent and the causes they champion or reject following the nationally telecast debates as well as their publicized utterances and actuations.

He appealed to candidates to allow each Filipino the “free and untrammeled right to an informed choice.”

“This means, among other things, that you cannot deceive or mislead the people by proffering them falsehoods, much less defraud the nation. We say to you, dear candidates: Pray! Pray not only to win, but pray that the Lord may show by His signs, His chosen leader for this nation,” Villegas said.

“The campaign period has been rancorous. This is regrettable. Many wounds have been inflicted. This is true not only of candidates but also of their supporters. Even close friends have parted ways because of differences in political persuasion and in the choice of candidates to support,” the pastoral letter further stated.

When the elections are over, he said, elected leaders should become instruments of peace, reconciliation and healing.

“Whoever wins honestly, whoever takes the oath of his or her office seriously, whoever strives to heal the wounds of the divisiveness of politics, whoever respects the rights of all and is earnest in his or her fear of God and is zealous for his precepts has the support of the Catholic Bishops’ Conference of the Philippines,” Villegas said.

“Let those who prevail rise in nobility above the hurtful words that may have been uttered by opponents, and draw them rather into a government of unity. Not whim, nor arbitrariness, not vendetta nor revenge, but the rights of God’s people, enshrined in the Constitution and their demand for justice, unity, progress and peace to which every law must respond,” he added.

The CBCP President added that Catholic bishops will do everything together with their priests so that all Catholics even in the remotest barangays to which they minister, may rally around a just and God-fearing government that “visits no vengeance on foes but is characterized by mercy and compassion for all, not only for allies!”

While Catholic bishops and priests couldn’t endorse any candidate or party, Villegas said the Church has a mission “to pass moral judgments even in matters related to politics, whenever the fundamental rights of man or the salvation of souls requires it.”

To be guided in choosing the right leaders, Villegas encouraged Catholics to pray the rosary every day and receive Holy Communion starting May 1 until May 9.

With the permission of the bishops, the Blessed Sacrament, he said, may be exposed for public adoration to beg the Lord for the gift of peaceful elections.

On Friday, May 6, Cebu Archbishop Jose Palma will preside over a holy Mass at the Cebu Metropolitan Cathedral to seek divine help for an “honest, peaceful, and orderly elections.”

The Eucharistic celebration will be followed by a prayer walk to Plaza Independencia where a Benediction or exposition of the Blessed Sacrament will be held.