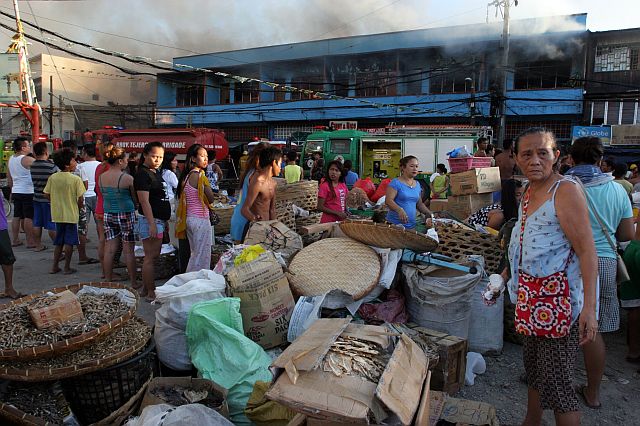 Vendors of dried fish managed to save their merchandise during the fire that destroyed over 70 houses and killed four children and three adults in Barangay Pahina Central. (CDN PHOTO/JUNJIE MENDOZA)

Sandra Chan, 43, said her family urgently needed kitchenwares so they can cook their own meals after the Department of Social Welfare and Services (DSWS) stops distributing food packs.

Chan, who works as a bookeeper in the barangay, said they were not able to save anything from the fire that hit their community Saturday dawn and caused the death of four children and three adults.

Chan was thankful that she, her husband and three children, were not injured.

The Chan family is temporarily staying at the dilapidated One Citlink Terminal beside the fire site.

A total of 118 families displaced by the fire are staying at either the terminal, Barangay Pahina Central Gym, or Barangay San Nicolas Proper Gym.

Re-blocking of the fire site, which is normally undertaken by the Cebu City government after a fire, is not a priority at present, said Cebu City Mayor Michael Rama.

The mayor yesterday said they will focus first on investigating the incident as well as providing social services and financial assistance to the victims.

Families of the fatalities will get burial assistance on top of the financial aid.

“I don’t want to make any final position yet. What is really primordial is the investigation nganong namatay ang pito ka buok (why the seven died),” he said.

Rama said he was able to go to the fire site immediately because he was on his way to attend the dawn rosary in Lahug when the fire broke out.

Ricardo Alvarez, Jr. , whose common-law wife Cindy Galvan and three young children perished in the fire, said he was trying to be strong for the family of Cindy.

As of yesterday, he said he has not received any financial assistance from the government.

Another fire victim, Gemma Lederos, 45, said she was not able to save any material things because she focused on getting her 83-year-old mother to safety.

Because of adrenaline rush, she was able to carry her mother by piggyback and run outside the site.