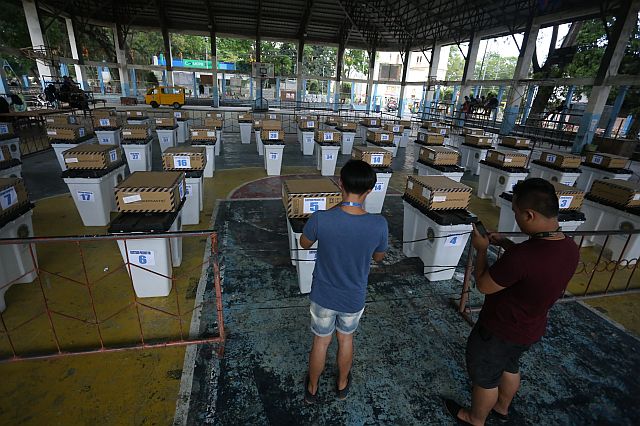 VOTE COUNTING MACHINES (VCMs) to be used in today’s national and local elections are kept on Sunday at the municipal-owned covered court in Tuburan, one of the eight areas in Cebu province declared as an election hotspot. (CDN PHOTO/Lito Tecson)

Despite tension in some areas and reports of rampant vote-buying in many towns and cities of Cebu, election and law enforcement officials have declared they were on track and all set for today’s national and local elections .

Cebu Archbishop Jose Palma, meanwhile, urged the electorate to pray for clean, honest and orderly polls as volunteers of the Cebu-Citizens Involvement and Maturation for People Empowerment and Liberation (C-Cimpel) prepare to safeguard every vote.

“Always remember that casting one’s vote is a sacred duty. Let us all discern and pray,” he said in his homily at the National Shrine of St. Joseph in Mandaue City, which celebrated its feast yesterday.

The prelate on Friday called on voters to choose candidates with modest lifestyles, proven track records, who care for the environment, are pro-life, God-fearing and have good reputations.

Amid rumors to sabotage the elections and ensure the victory of some candidates, Msgr. Joseph Tan, spokesperson of C-Cimpel and the archdiocese of Cebu, said Filipinos should not be afraid.

“There are several conspiracy theories that have been circulated. But oftentimes, these are fabricated. Of course, we will not know until it happens,” he told Cebu Daily News over the phone.

“There’s already a lot of tension now going into election day. Let’s not add to that. It’s not healthy to worry about this or that,” he added.

Tan encouraged the public to trust in the electoral system and the Commission on Elections (Comelec). “We should be optimistic and prayerful instead,” he said.

Tan nonetheless called on Cebuanos to stay vigilant and to ensure that the every vote will be counted. “We rely on our democratic process,” he said.

Jose Nick Mendros, regional director of Comelec in Central Visayas, said voters should exercise their right to vote today despite reported incidents of violence against candidates in several towns.

“Go out and exercise their right to chose their leaders,” he told CDN.

Strafing incidents targeting houses or vehicles of candidates or their supporters were reported since Friday. A former bodyguard and a key supporter of reelectionist Mayor Democrito Diamante of Tuburan was killed in an ambush last May 4. The mayor is pointing an accusing finger at his political opponent, Daphne Lagon, who has belied the charges.

Mendros said they had anticipated that prior to election day there would be election-related incidents in some areas in the region, particularly those in the list of election hotspots or the election watchlist areas (Ewas).

“We anticipated everything. But we are calling to all parties specially candidates to respect the rule of law and the rights of others,” he said in a text message to CDN yesterday.

Mendros assured they have enough policemen to address these security concerns, and the added help of the Armed Forces of the Philippines.
VCMs in place

By 5 a.m. today, all vote-counting machines (VCMs), official ballots and other election paraphernalia should already be in their respective precincts in all the towns and cities of Cebu province, said Provincial Election Supervisor Eliseo Labaria.

The Comelec, together with the police, also started on Sunday the delivery of the materials to far-flung areas and on the islands, he added.

“This early, we can say that together with our counterparts in the Philippine National Police and the Armed Forces of the Philippines, the election for 2016 is a go. Ready na,” Labaria said during the briefing held yesterday at the Election Media Center (EMC) inside the Police Regional Office (PRO) 7 headquarters.

Around 200 extra VCMs are on standby in case there are problems with the VCMs that have been set up at the precincts, he added.

He said that during Friday’s final testing and sealing in the province, seven VCMs were found to be defective and were immediately replaced. “Defect can be caused during transport. There may also be cases when the machine doesn’t accepts ballots or when the printer will not print. If these happen, that’s when we use the contingency,” Labaria explained.

Senior Supt. Armando Radoc, head of operations and management plans division of Police Regional Office Central Visayas (PRO-7), said they were on heightened alert but were not expecting any untoward incident today.

He said each precinct will be guarded by at least two policemen.

There are 4,066 clustered precincts on Cebu Island, including the highly urbanized cities of Cebu, Mandaue and Lapu-Lapu. Each of the 4,066 VCMs was tested and sealed last Friday.

Labaria said they were confident that the teachers serving as board of election inspectors (BEIs) already understood the general instructions for operating the VCMs, especially after last Friday’s final testing and sealing. Each of the VCMs has a generic battery that can last for 18 hours, allaying fears over possible power outages during the voting. The standby generator sets they prepared would be used in canvassing areas, he added.

“I can safely say that there are no bases for those reports. Some of that may be a disinformation campaign. During the final testing and sealing, we haven’t received a single report that whatever was shaded in the ballot was different from what came out in the vote receipt,” he said.

In fact, Labaria said that the accuracy of the VCMs is probably the reason why more candidates are resorting to vote-buying.

“Maybe the reason why there is rampant vote-buying as compared to previous elections, before automation, is that candidates understand they can’t cheat the VCM. That’s why vote-buying is the only way they can address their concerns on how to win,” he said.

As for the SD cards in the machines, Labaria said a national technical support center was set up in Cebu to immediately reconfigure defective machines or SD cards.

Voting will start at 6 a.m. and end at 5 p.m. However, the Comelec will allow those lining within a 30-meter radius from the precinct during the cut-off to cast their votes.

After voting, Labaria said the VCM will print eight election returns – one of which will be given to C-Cimpel and another one will be posted outside the precincts.

After posting, he said the VCM will start transmitting the record of votes within a limited time frame to the canvassing areas. After transmission, the VCM will print another 22 copies of the election returns.

Once all the election returns are printed, the BEI’s will shut down the VCM. The ballot box containing the ballots as well as the vote receipts will be turned over to the respective municipal or city treasurer’s office, while the VCM will be retrieved by the Comelec.

“It is only by being credible in this election process that the result of the elections will be acceptable. Without the credibility of the process, all our results will be put into question. It’s a call for integrity to all those who will serve,” Labaria said.

Radoc, for his part, said: “This is our job as a deputized agency of the Comelec, to ensure that you exercise your right of suffrage free from harm and fear.”

To secure Cebu province, 943 policemen were deployed as augmentation forces to various towns, cities and provinces in the region.

“We also prepared reaction forces to (be sent to) any area where (they are) needed,” said Radoc.
Quick Response Teams (QRT) composed of Special Weapons and Tactics (SWAT) personnel have been deployed to eight strategic areas and districts in Cebu province.

These areas include the islands of Bantayan and Camotes, Bogo City, San Fernando, Dumanjug, Santander, the Balamban-Tuburan area and Argao town.

He said a reserve reactionary force is on standby at the Regional Public Safety Battalion Central Visayas (RPSB-7), which could be deployed to areas where they would be needed.

The Armed Forces of the Philippines Central Command also has placed on standby, a platoon to augment the police forces of the PRO-7.

Despite efforts of anti-vote-buying groups like I Vote Good, vote-buying was reported in practically all parts of Cebu City and province.

The attempts to buy votes were posted on Facebook yesterday by concerned Cebuanos, complete with photos of the envelopes that contained cash – ranging from a low of P50 to a high of P500, together with the sample ballots of the candidates.

But this apparently did not deter the candidates from still engaging in vote-buying up to late last night. (See separate story page 2.)

Meanwhile, power companies and cooperatives in Cebu promised adequate power supply, except for the Bantayan Electric Cooperative (Banelco) that was low on reserves.

Banelco general manager Lee Rivera said they have five generator sets with a combined capacity of 8.5 megawatts but the peak load for the whole island – composed of the towns of Bantayan, Madridejos and Sta. Fe – is about 5.2 MW.

Residents of the island have been complaining about the frequent brownouts on Bantayan Island since last month but no rotational brownouts were experienced recently on the island.

In case there would be a power shortage, Rivera said they would cut off power to residential areas in order to prioritize the polling centers.

The Cebu Electric Cooperative (Cebeco) III has enough power reserves to meet the needs of its franchise areas – Toledo City and the towns of Asturias, Pinamungajan and Aloguinsan,

MW while its peak demand is only 56 MW. Cebeco II covers the towns from Medellin to Tuburan.

He clarified that the power interruptions reported in Medellin from 11:05 p.m. to 11:36 p.m. on Saturday were due to the emergency repair of their automatic voltage regulator that was affected by a sugarcane plantation fire on Friday while that in Bogo City’s Barangay Poblacion that occurred from 7:05 p.m. to 7:30 p.m. on Sunday was due to a trip in the power breaker.

For the telecommunication sector, Ramon Isberto, head of the public affairs division of the Philippine Long Distance Co. and Smart Communications, assured their company is prepared for today’s election.

“Our facilities were tested and we assure no breakdown that will happen,” he said.