Gica calls for unity after winning against Garcia

VICE Mayor Efren “Gungun” Gica of Dumanjug town called for unity after he was officially proclaimed mayor by the town’s Board of Election Canvassers at past 4 a.m. yesterday. 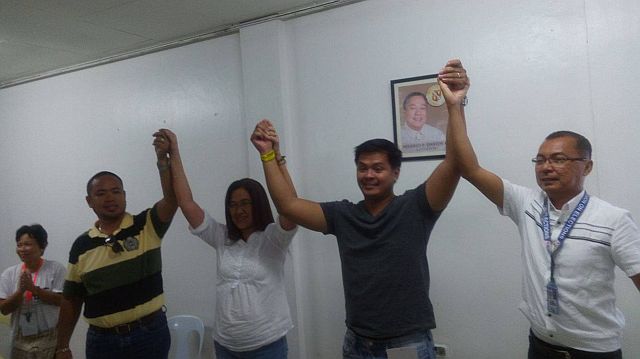 “Humana ang kumbati sa politika (The elections are over), and I assure you that there will be no more One Cebu, no more Liberal Party; there’s going to be one party and it is I love Dumanjug,” Gica told reporters after he was proclaimed.

As of 3:41 a.m. yesterday, Gica, who ran under the Liberal Party (LP) Cebu chapter, garnered 15,577 votes to top outgoing Dumanjug Mayor Nelson Garcia of One Cebu who received 10,631 votes.

“I’m very sure that my fellow municipal officials will work together,” Gica said.

Mayor Garcia conceded to Gica, saying he will make a good mayor of Dumanjug town.

“It’s water under the bridge now. If that’s what the people want, I respect their decision and accept my defeat. Let’s set aside politics and unite for the town’s sake. I am hoping that there’ll be peace for Dumanjug,” Garcia told reporters hours after the election results came out.

Gica’s running mate Rainerio Asentista was proclaimed Vice Mayor of the town after receiving 11,768 votes, leaving behind rivals Cardo Condes who got 8,734 votes and Luciano Famor with 4,305 votes.

Gica kept his lead over Garcia up into the transmission of the last precinct’s election result.

During the transmission of election returns, 40 areas were unable to send their election results electronically.

“We’ll check why there are so many that had to manually transmit the results when they are nearby yet were unable to do so,” Angcos said.

He said they had to manually recover the SD cards of the vote-counting machines to count these returns.

Dumanjug has a voting population of 32,494 who voted in 60 clustered precincts.