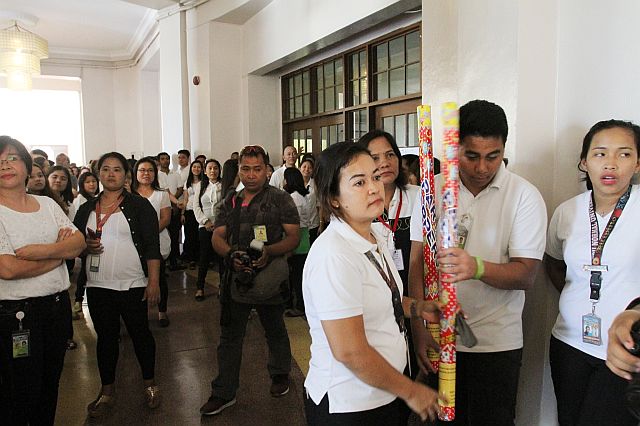 Capitol employees and media members wait at the entrance of the Capitol Social Hall for the proclamation of Cebu Gov. Hilario Davide III on Wednesday. A delay in the transmission of election returns from three towns has led the Provincial Board of Canvassers to announce its postponement. (CDN PHOTO/ JUNJIE MENDOZA)

A DELAY in the canvassing of votes from three Cebu municipalities has pushed back the official proclamation of reelected Governor Hilario Davide III (LP) and Vice Governor Agnes Magpale (LP) ostensibly until the Commission on Elections (Comelec) is able to resolve problems in the transmission of votes from the towns of Malabuyoc, Santander and Cordova.

The Provincial Board of Canvassers (PBC) once again suspended the count at the Cebu Provincial Capitol yesterday as the three towns were still unable to transmit their election results to the canvassing center.

Canvass was unable to start in Malabuyoc, a town southwest of Cebu and the town of Santander in the South because of problems with their Consolidated Canvassing System (CCS).

Cebu Comelec Supervisor Eliseo Labaria yesterday announced that the election officers of Santander and Malabuyoc had left for the Comelec warehouse in Cabuyao, Laguna to get replacement CCS machines so that the canvassing process in the two towns can proceed. The election officers are scheduled to be back today with PBC expected to reconvene at 3 p.m.

“Dili mi maka-proclaim ug walay basis kay ang basis sa transmission kay ang transmitted results sa municipal board of canvassers. Hangtod way mosulod diri sa ilang electronic transmission, dili pa mi maka-proklamar ug bisag unsa (We cannot just proclaim without any basis since the basis will be the transmitted results from the municipal board of canvassers. Until there are no electronic transmissions that will come in, we cannot make any proclamation),” Labaria said in a media interview yesterday.

The PBC is also awaiting the transmission of results from the town of Cordova pending a petition filed by a candidate for councilor asking the poll body to allow 436 voters from Barangay Gabi to vote after official ballots intended for the village landed instead in Dalaguete, Southern Cebu last Monday.

The petition was granted by the Comelec Central Office yesterday and special elections for voters in the village have been set this Saturday.

Even though One Cebu bet Winston Garcia’s conceded defeat on his Facebook page last Tuesday, Labaria believed that results from the three towns may still affect the standing of the two gubernatorial candidates.

The hitch in the canvassing of votes for Cordova also resulted to a delay in the proclamation of other candidates in the 6th district to which Cordova belongs.

Citing Comelec Resolution No. 10102 which states that the BOC may lower the transmission threshold to not less than 90 percent as basis for proclaiming winners, the lawyer of Provincial Board (PB) candidate Jonkie Ouano (One Cebu) Atty. Gonzalo Malig-on Jr. asked the PBC to lower the transmission threshold to 90 percent to allow the proclamation of leading candidates for Cebu’s 6th district representatives.

PBC chair Eliseo Labaria said that the decision to lower the transmission threshold was not up to them but for the Comelec enbanc to decide.

“The votes are all in, but all we need is the transmission of results. We need to follow the process before proclaiming a winning candidate,” he said.

Based on the latest official tally, outgoing Mandaue City Vice Mayor Glenn Bercede (LP) led the race for the 6th district provincial board seat with 95,502 votes, followed by Ouano with 87,285 and Julius Alegado (LP) with 62,672 votes.

Cebu Provincial Prosecutor Pepita Jane Petralba, PBC vice chair, said that they will hold in abeyance the proclamation of apparent winners-elect for board members in districts where canvassing has not been completed.

“There is an effect on seniority in the outcome of the number of final votes … Considering that there is an effect in the hierarchy, we are holding in abeyance the proclamation of these candidates,” she said.

With data from the towns of Santander, Malabuyoc and Cordova still pending, transmission stood at 96.6 percent as of yesterday.

Read Next
Tension in Daanbantayan