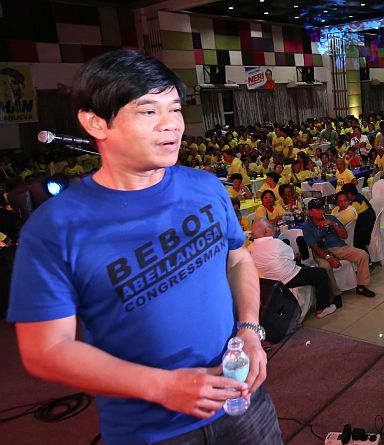 Rep. Rodrigo “Bebot” Abellanosa of Cebu City’s south district may not be able to assume his post despite his reelection.

The Office of the Ombudsman in the Visayas is pressing for the imposition of the penalty of dismissal from service against the lawmaker after finding him guilty of grave misconduct for conflict of interest.

Abellanosa has ignored calls by the anti-graft office that he step down from office, saying that his lawyers had advised him that the decision which imposed the penalty of dismissal and perpetual disqualification from public office is “unconstitutional.”

“Hence, both Congress and Comelec have refused thus far to enforce the decision. The Ombudsman cannot insist on the enforcement of its decision as a means to frustrate the will of the people,” he said in a statement sent to Cebu Daily News.

“The people have spoken. They have chosen me as their representative. It is undemocratic for the Ombudsman to insist otherwise,” Abellanosa said.

Abellanosa was cited for conflict of interest after his school, Asian College of Technology International Education Foundation Inc. (ACTIEF), received the bulk of Cebu City Hall’s scholarship funding assistance when he was still a city councilor in 2010.

“The penalty against Congressman Abellanosa has to be executed immediately. Yes, he can avail of whatever legal remedies. But unless restrained by a competent court, our decision has to be carried out even if he is still contesting the verdict,” lawyer Ma. Corazon Naraja, spokesperson of the anti-graft office based in Cebu City, told CDN yesterday.

Abellanosa has a pending appeal before the Court of Appeals on the 2014 decision by the Ombudsman meting him with a penalty of perpetual disqualification from public office over his involvement on the city’s scholarship program.

He said the Ombudsman’s call for the implementation of its decision should be raised with the Court of Appeals.

The dismissal from service also carried with it the cancellation of eligibility to vote and be voted upon, forfeiture of retirement benefits and perpetual disqualification from government service.

No action has been taken by both bodies as of now.

A petition to disqualify and cancel the Certificate of Candidacy of Abellanosa was also submitted to Comelec by Philip Banguiran, the same person who filed the complaint before the Ombudsman.

The anti-graft office said Abellanosa could not invoke the Aguinaldo Doctrine because he was not reelected to the same position.

The Aguinaldo Doctrine, which extinguishes all administrative liability of a reelected public official for acts done during a prior term, was also scrapped by the Supreme Court last year.

Abellanosa was reelected last Monday. Based on the official tally of Comelec, Abellanosa pulled in 149,259 votes to defeat Gerardo Carillo who received 97,491.

Carillo, meanwhile urged Comelec to rule on the petition for disqualification against Abellanosa.

Comelec Regional Director Jose Nick Mendros said he hasn’t received any advice yet from their central office regarding Abellanosa’s case.

But if the poll body will disqualify Abellanosa, Mendros said the second placer will take the position.

“In cases of disqualification, the second placer can sit down,” he said in a phone interview.

If Abellanosa will be asked to step down by the House of Representatives and the Comelec hasn’t ruled on the disqualification case, Mendros said a caretaker appointed by Congress will take over.

In 2012, Banguiran, a resident of Cebu City, filed a case against Abellanosa before the Ombudsman for the latter’s alleged involvement in the city’s scholarship program which benefited his school.

Abellanosa owns the ACTIEF, one of accredited schools for Cebu City’s scholarship program. He also serves as president of the school.

In his ruling, graft Investigation and Prosecution Officer Jess Vincent Dela Peña said that conflict of interest was obvious and that Abellanosa’s exercise of dual positions—then city councilor and president of both schools—has created a conflict of interest.

The decision was approved by Ombudsman Conchita Carpio Morales.

Read Next
Medellin village a drug haven, says the mayor