WHAT ABOUT THE STREETKIDS? 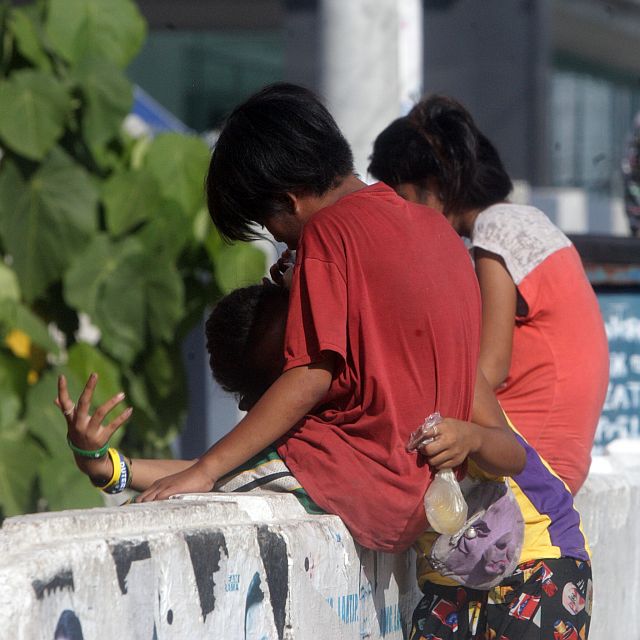 RUGBY KIDS? These street children are openly sniffing rugby solvent, a cheap way to get a drug fix, along the Mabolo Bridge located just across the Mabolo Police Station. The solvent is allegedly sourced from a nearby shoe repair shop. Netizens ask Cebu City Mayor-elect Tomas Osmeña to address the city’s swelling number of street children, who are also involved in illegal drugs. (CDN PHOTO/TONEE DESPOJO)

Just as incoming Cebu City Mayor Tomas Osmeña is getting focused on his fight against criminality and his bounty system for slain crime suspects in the city, several sectors are now asking how he plans to address the rising number of street children, many of whom are believed to be drug users and petty criminals.

Osmeña himself acknowledged this, posting yesterday on his official Facebook page a picture of street children gathered along Osmeña Boulevard near the Social Security System (SSS) Office.

“Many people on FB are sending this picture to me. I know that this is a big problem in our city now. Handling this type of issue is not my specialty, but I’m very, very close to someone who’s a master at this :),” he said.

He was referring to his wife Margarita “Margot” Osmeña, now the city’s acting mayor, who is a known advocate for children’s rights and welfare.

“Margot’s specialty has always been street children. We were once given the title of Most Child-Friendly City by no less than UNICEF (United Nations Children’s Emergency Fund). WE will earn that title again :),” Tomas added on his Facebook Page.

Margot established the Children of Cebu Foundation and has helped raise funds for the Cebu City Task Force on Street Children (CCTFSC), especially when the city government stopped its support for the nongovernment organizations a few years back.

Margot yesterday said she intended to meet with the heads of concerned departments and offices to get a clear picture of the situation of street children in the city.

“Even without knowing (about the Facebook post), I already asked for a meeting with DSWS and all the special bodies concerned. We have to give priority back to that,” she told Cebu Daily News.

Aside from the Department of Social Welfare and Services (DSWS), other special bodies also involved with street children include the Cebu City Anti-Mendicancy Board; Cebu City Community Scouts Commission; and the Cebu City Welfare and Protection of Children.

Margot lamented that addressing the situation of street children was not given priority by the administration of suspended Cebu City Mayor Michael Rama. Several good programs that were started when her husband was the mayor of the city were discontinued by Rama’s administration, she added.

“Before, they were given priority. The programs were in place and active. A very good manifestation of that is we were the most child-friendly city,” she said.

“We never solved the problem completely and it will never happen. But at least there’s movement. Now, there’s none. Or at least it doesn’t seem so many. It’s so clear, it hasn’t become a priority anymore. Maybe because they’re not voters?” she added.

Among the programs that used to get praises for the city government was the Mobile School Program of the Children of Cebu Foundation, which Margot spearheaded when she was still the city’s First Lady.

Under the program, children from urban poor families or those from depressed areas were brought on buses to an area where they were given nonformal education by teachers.

The foundation is also managing the Parian Drop-in Center which acts as a referral center for abandoned children.

The city government and the DSWS are both part of the CCTFSC, which acts as the umbrella organization of all nongovernment organizations that advocate for the welfare and protection of children.

According to Cathy Yso, who was the DSWS chief from 2007 to 2011, the city government used to provide support to the Parian Drop-in Center by giving rice, canned goods and other basic needs to the facility.

“The Mobile School Program of the Children of Cebu Foundation was not continued because the (employment contracts for the) teachers that were employed by the city government were not renewed. That was in 2011 or 2012. And the foundation cannot support itself anymore,” Yso said.

Margot said she tried to sustain the program through private donations she solicited but the money she raised was not enough to meet the P100,000 a month that was needed to keep it going, forcing her group to eventually drop the mobile school project.

Earlier this year, DSWS Chief Ester Concha said they have completed profiling all street children. Based on their results last February, they have listed around 600 street children in the city.

Concha earlier said some of the children actually have homes and just choose to roam the city’s streets with their friends, or beg for money and food.

She also said some of them come from very poor or dysfunctional families.

The profiling was made through funds given by the Department of Social Welfare and Development in Central Visayas (DSWD-7).

The city government also allotted P2.8 million to DSWS for a six-month comprehensive program on street children, according to Concha.

Concha said under their budget this year, they were supposed to have a prefabricated shelter that could house more than 200 people. The shelter is where they will bring street children and dwellers for “processing” and for interventions. But until now, the facility has no place where it can be set up.

It was first built in Barangay Lorega San Miguel but was dismantled after barangay officials asked the city to transfer the facility. The second proposed site was near the Community Scouts Center (CSC) in Barangay Duljo-Fatima but this did not materialize either since it would have displaced around 35 families.

Margot also lamented the choice of CSC as host for the shelter since the facility in itself was not being properly managed by the city.

“The staff of the Rotary (Club), which has an office there, has witnessed abuses of house parents on the children. I’m going to find that out, too,” she said.