Mandaue fire victims need safe shelter away from the rain 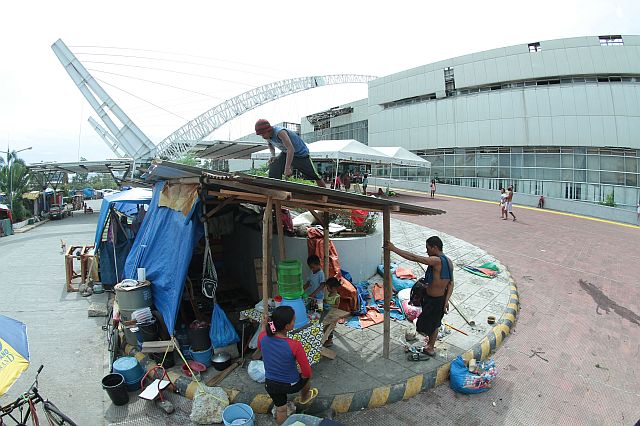 FIRE VICTIM Narciso Hernani fixes the roof of his makeshift house inside the CICC compound after they were drenched by the heavy early morning rain. (CDN PHOTO/FERDINAND EDRALIN)

SEVERAL thousand fire victims of Barangays Guizo and Mantuyong now staying at the Cebu International Convention Center (CICC) grounds woke up at dawn on Wednesday amid a heavy downpour and found themselves running to take shelter at the building’s entrance and its underground area.

Their makeshift tents were no match to the heavy rain, many of which only had empty sacks of rice for a wall, like the one occupied by Lindy Mae Boncalis, 26, and her husband and two-year-old daughter Althea.

Shirley Garbo, 31, said her five young children had to sleep on a cold floor covered with only a thin mat each night. With the rain, she would now make her children sleep at the entrance of the CICC building.

As the fire victims’ circumstances get worse with the onset of the rainy months, the Department of Health’s Regional Epidemiological and Surveillance Unit (Resu-7) asked the Mandaue city government to find sturdier shelter for the fire victims or make them stay inside the dilapidated CICC building.

Resu-7 chief Rennan Cimafranca noted that fire victims exposed to the elements at the CICC grounds were getting sick, mostly with coughs, colds, fever and diarrhea.

There are about 6,000 individuals from about 1,500 families still living at the CICC grounds for the past two months since the fire that razed the two barangays in March. Among the evacuees are 1,109 children, ages zero to 12 years old.

The Mandaue city government has also so far spent around P200 million to feed the fire victims and to keep the CICC grounds habitable, said city information officer Roger Paller.

But finding an alternative shelter for them was still not in the offing, amid a promise by the city government to soon finish the reblocking of their burned villages so the displaced families could return to rebuilt their homes.

Also, the Cebu Provincial Disaster Risk Reduction and Management Office (PDRRMO) has yet to come up with a decision on whether they would give clearance for the CICC evacuees to occupy the structure given the risks involved, said PDRRMO spokesman Julius Regner.

“We cannot guarantee the safety of the building. If we allow all of them to occupy the inside, we would be forced to use the dangerous areas as well, such as those with hanging scaffolding or fallen debris from the ceilings,” he told Cebu Daily News over a phone interview yesterday.

Tribunalo earlier said that allowing the evacuees to occupy the CICC would be a last-resort contingency measure in case of heavy rains, but the plan was not seriously considered until the heavy rains in Cebu last Wednesday morning.

Regner said they hoped to come up with a decision today.

“We have rooms on the first floor which can be occupied and are considered safe. But it’s not like there are 30 of them who need shelter from the rain.

There are also children who will be running around,” said Regner.

Acting Gov. Agnes Magpale, in a separate interview, said she was also concerned about the safety of the structure.

“The ceiling is already leaking. The more it rains, the more damaged it gets,” she told CDN over the phone.

She said she will have to refer the matter to the PDRRMO, since they are the experts.

Provincial Engineer Hector Jamora earlier said the CICC is still structurally sound but the construction debris inside the building could pose danger to its occupants.

Jamora also said that about 1,500 people could be accommodated at the basement parking area, another 600 at at the ground floor and 1,800 at the Plenary Hall on the second floor.

Read Next
Malversation charge against village chiefs in blotter entry