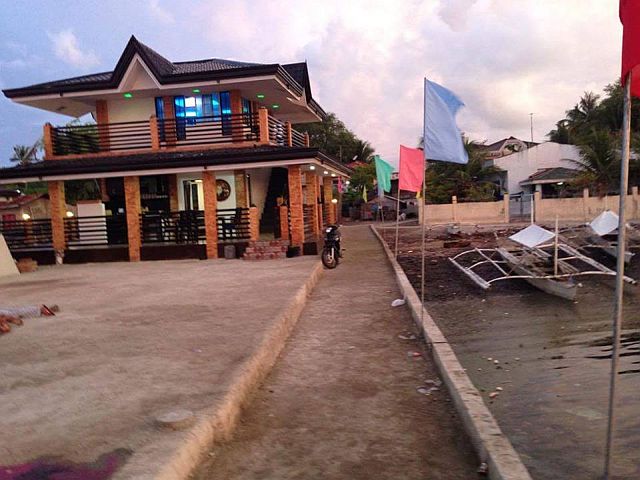 POSH HIDEOUT. This two-story colonial-type house on Banacon Island, Getafe, Bohol is allegedly owned by Cebu City’s third most wanted drug personality. This is where the shootout happened that led to the death of alleged drug lord Rowen Secretaria alias “Yawa.” (CONTRIBUTED)

From a distance, Banacon Island off the town of Getafe in Bohol, appears to be a sleepy fishing village where everyone knows everyone else and where law-abiding fisherfolk live quiet and simple lives.

But in reality, the islet, one of eight island-barangays of Getafe town located just about 6 kilometers from Mactan Island, hid a secret. It was a safe haven for the third most wanted drug lord of Cebu City who had been on the lam for three years.

Yesterday, the secret of Banacon Island was revealed when anti-drugs agents on board three pumpboats raided the island at dawn and killed in a shootout Rowen “Yawa” Torrefiel Secretaria, who had maintained residences both on Banacon and Barangay Ermita in Cebu City, and two of his alleged cohorts.

The island, only about 30 minutes by motorized banca from Cebu, is where Secretaria allegedly maintained the bulk of his drug operation, particularly in Cebu City’s Barangays Ermita and Pasil and on Mactan Island’s Lapu-Lapu City and Cordova town.

Secretaria reportedly could dispose of around five kilos of shabu (methamphetamine hydrochloride) per week, which, according to the Dangerous Drugs Board, could mean a street value of about P59 million at the prevailing rate of P11,800 per gram.

Secretaria, who occupied a sprawling colonial-style “resort-type” house on the islet, allegedly tried to shoot it out with the policemen who came at around 4:30 a.m. But he and his three armed companions were outnumbered. During the shootout, Secretaria and three others were wounded.

However, Secretaria and two of his cohorts died while being transported to a hospital in mainland Bohol.

The other wounded suspect, Ricardo Ostolano, 26, of Calituban Island, Talibon, Bohol, was brought to the Gov. Celestino Gallares Memorial Hospital in the capital city of Tagbilaran, according to PO2 Armando Balagot of the Getafe Police Office.

The raid was a joint operation of Cebu-based units – the Regional Anti-Illegal Drugs Special Operations Task Group in Central Visayas (RAIDSOTG-7), the intelligence branch of the Cebu Provincial Police Office (CPPO) and the Regional Public Safety Battalion (RPSB-7) – and the intelligence branch of the Bohol Provincial Police Office (BPPO).

Senior Insp. Henrix Bancoleta, of the Cebu-based RAIDSOTG-7 who led the raiding team, said that when they arrived on the islet, Secretaria was in the middle of a meeting with his cohorts at the first floor of his house located just meters away from his private docking area.

Secretaria had long been considered “untouchable” in the islet as he made it a point to satisfy the needs of the residents by providing them with electricity through generators and solar power, and by supplying them with food.

However, some village leaders decided to squeal on Secretaria after he started to give away packs of shabu to some residents he recruited as his armed bodyguards.

While the slain drug lord was identified to be from Cebu City, Bancoleta said they have yet to receive word from Mayor-elect Tomas Osmeña if they would receive the P50,000 reward he offered to law enforcers who could kill a crime suspect.

Secretaria allegedly fired the first shot when he sensed the presence of the policemen, which led to the shootout.

According to Bancoleta, there were several other armed members of Secretaria’s gang who eluded arrest by hiding in a mangrove forest on the islet.

The raided house was just one of three two-story structures that Secretaria had built on the islet. The drug lord also owned several speedboats he used to transport drugs to Cebu and on mainland Boho.

“Magbalhin-balhin ra na siya kay naa siya’y pumpboat (He was able to hop from one place to another because he has a pump boat),” he told Cebu Daily News.

He said Secretaria has long been on the watchlist of Bohol and Cebu City authorities. He is believed to have had another safehouse in Barangay Ermita. He ranked third among the top drug personalities in Cebu City.

The first two are Jeffrey “Jaguar” Diaz, of Barangay Duljo Fatima; and a certain “France.” Both remain in hiding.

Recovered from Secretaria was a KG 9 assault pistol while a .45 cal pistol and two .38 revolvers were recovered from his bodyguards.

BPPO spokesperson Supt. Ricky Delilis said the police had been trying to track down Secretaria for years.

“He was on the list of wanted persons but he was very elusive,” said Delilis.

Secretaria’s illegal drug operation was extensive because it spanned the two provinces, he added.

Delilis said the BPPO has earlier identified the top 10 areas in Bohol which are deeply infiltrated by drugpushers: Tagbilaran City and the towns of

He also said that the illegal drugs from Bohol usually come from Ozamis City, Cebu and Metro Manila including New Bilid Prison in Muntinlupa.

“Bohol is an island and is very near to Cebu. Puwede lang ito marating ng bangka kahit hindi na dumaan ng pier (It can be reached by just using small boats without passing through the pier),” said Delilis.

In the case of Banacon Island, Delilis said drugs were sent through parcels.

“They have couriers, who are using different ports. Drugs from Cebu are sent through roll-on/roll-off (Ro-ro) vessels docking at the ports of Tagbilaran, Ubay, Tubigon, Talibon, Jagna, Getafe and Loon,” he added.

Some drugs were shipped from Cebu to the coastal towns of Bohol through fishing vessels, Delilis added.

According to Bancoleta, Secretaria had spent some years in the national prison in Muntinlupa City for robbery. He was released in 2013 and soon after started his illegal drug operation in Barangay Ermita.

In 2013, a joint team from RAIDSOTG and CPPO tried to apprehend Secretaria in Getafe, Bohol but he was able to elude arrest. Police were only able to seize P3.5-million worth of illegal drugs.

Employees Union asks Daluz to step down as MCWD chair

Apolinario, IBO flyweight champ, is GAB’s boxer of the month