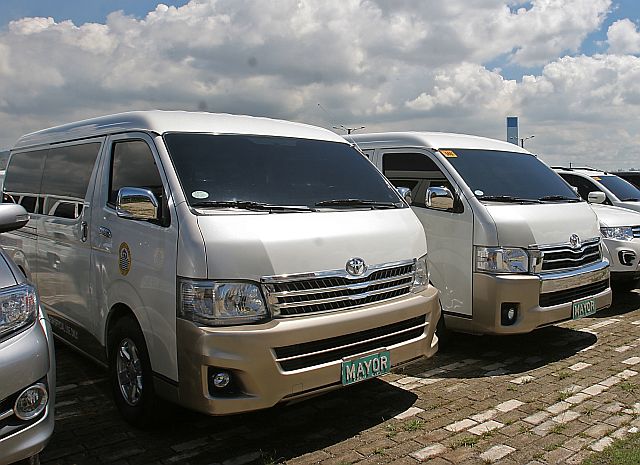 Two white Toyota Grandia vans bearing the vanity plate “Mayor” were placed beside each other at the South Road Properties (SRP) where all recalled Cebu City government vehicles are being kept.

But why were two vans issued to the mayor? Acting Cebu City Mayor Margot Osmeña wanted to know.

“The other (newer) one just came in last March, after his (Michael Rama) suspension. I have no idea (why they bought a new one). But still, why will you get a new one when the other one is not that old?” Osmeña told Cebu Daily News.

She recalled that her husband, incoming Mayor Tomas Osmeña, used a city-owned service vehicle for more than 10 years.

The two vans assigned to suspended Mayor Rama were among the over 200 service vehicles that were recalled by the city and parked at the SRP.
Osmeña said she was informed by former city councilor Augustus Pe Jr. that the two identical vehicles were strategically used by Rama especially during the campaign period for security purposes.

“He used the other one as a decoy. That’s how paranoid Mike Rama was,” Pe said.

Pe is a member of the transition committee that’s preparing for the mayor-elect’s assumption of office on July 1.

He alleged that Rama has been receiving threats to his life that’s why he would use the two vans to “confuse” the people supposedly after him. Rama denied the allegation.

Rama said when he got the new van earlier this year, he turned over the older van to now suspended Vice Mayor Edgardo Labella.

He said he used more than one vehicle during the campaign period.

“I used a private vehicle during the campaign period but my official van is always on standby in case of emergencies,” he said.

Labella confirmed Rama’s statement, saying he got the van after Rama got the newer one.

“At that time, my (city-issued) Kia Sorrento was also not functioning. It’s been in the shop for two months,” he said.

Aside from the Sorrento assigned to him, Labella recalled that he was also assigned a Mazda pick-up in 2013.

But since he already had the Kia, he decided to give the pick-up to the Department of Education (Deped) Cebu City office which needed a vehicle.

The mayor’s new van was budgeted under the city’s Peace and Order Program (POP) in 2015.

“I’m just the representative. The mayor, as the head of the peace and order program, has the prerogative to do so,” Tumulak said.