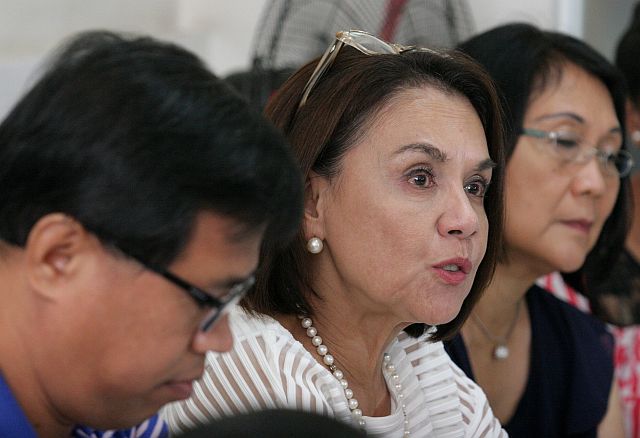 Acting Cebu City Mayor Margot Osmeña, seen in this May 23, 2016 file photo with outgoing Councilors Alvin Dizon and Nida Cabrera, says the JOs will be assessed based on their value to the departments they are serving. (CDN PHOTO/JUNJIE MENDOZA)

“They are not going to be renewed until we find out what they’re working on, unless they are validated. They are supposed to be project-based only,” Osmeña told Cebu Daily News.

Though they still have no clear records on how many JO workers are there in City Hall, Osmeña said they’ve discovered that 600 of them have salaries charged to the city’s calamity fund.

But in a meeting with officials of the Cebu City Disaster Risk Reduction and Management Council (CCDRRMC) last week, Osmeña said they recognized only 100 of these JOs.

Osmeña said she was told by Harold Alcontin of the CCDRRMC that they only have 60 JOs in their office.

Another 40 of the JO personnel are assigned to the Prevention, Restoration, Order, Beautification and Enhancement (PROBE) office.

She said there could be more JO workers whose salaries are charged in other sources like the Special Education Fund (SEF) and the Accelerated Social Amelioration Program (ASAP) funds, among others.

Osmeña said even City Hall’s Human Resources Development Office (HRDO) cannot give a master list of all the JO workers in the city since their salaries are charged to the budget of City Hall’s departments.

The city’s transition committee and incoming Mayor Tomas Osmeña had been meeting last week to conduct personnel audit on the city’s employees including JO workers.

A source, a committee member who requested anonymity, said they found out that there are at least 2,000 JO workers in the city who are assigned to different offices. Some are even doing clerical and routine office work.

There are 5,000 regular and casual employees at Cebu City Hall aside from the JOs. The source said the committee will assess if these JOs are vital to the departments they are assigned to.

“If they’re already doing routine work, we have to look into that. Why are they staying as JOs? Why are they not casual employees? We just have to put things in their proper places,” Osmeña said.

“If they deserve it” and if they are qualified, Osmeña said, some of the JOs may eventually be promoted into casual employees.

But the source explained that the city government cannot convert some of the JO workers into casual employees since the city already exceeded the allowed budget for personnel services.

Read Next
Quick response team gears up for rainy season