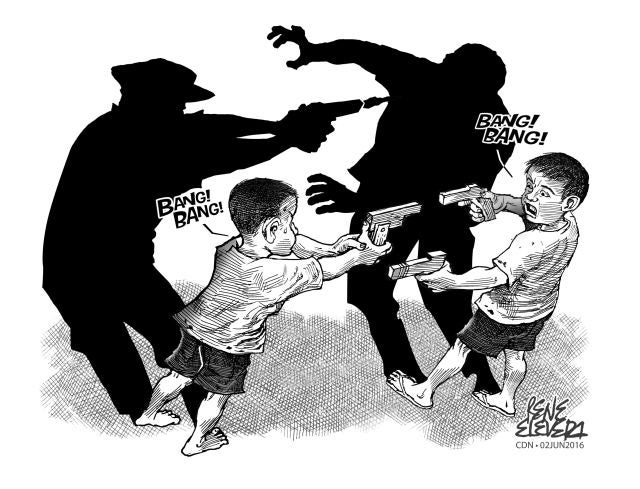 A child’s account of last Saturday dawn’s police operation that resulted in the deaths of suspected drug lord Rowen Torrefiel Secretaria and his alleged cohorts John Jason Montes and Dario Torremacha in Banacon Island, Gestafe town in Bohol province, reminds us somewhat of that new commercial by the Movie TV Review Classification Board (MTRCB) that is shown in theaters prior to a film showing.

In that commercial, two boys are shown reenacting a violent encounter between a police officer and a criminal suspect as they saw it on TV. Their imitation goes overboard when one of the boys imitates the criminal suspect holding a woman hostage by using his mother as “human shield.”

That commercial showing how life imitates art instead of the other way around illustrates how the child who witnessed that police operation saw it from her point of view. She described it as something straight out of a movie.

But it’s not a movie and she knew it and what she saw may haunt her for years. Per protocol, she would be turned over to the Department of Social Welfare and Development (DSWD), being a minor, but her account already showed a very disturbing picture of how a proactive police force may be like in hunting down criminal suspects, not hesitating to take a life if it involves a criminal suspect.

To be sure, the evidence against Secretaria looks solid; how can someone who claims to have sold jewelry for a living manage to build a mansion just near the shore of his own docking area and provide monthly food and assistance to residents running to thousands of pesos?

Only the residents themselves can answer that and by the looks of their muted fiesta celebration, they treated Secretaria’s death as something of a community tragedy.

But such is the common recourse of those suspected to be dealing in drugs not only to build goodwill but also win support from the community whom they can tap as lookouts for police.

It worked for suspected top drug lord Jeffrey “Jaguar” Diaz who continues to elude arrest and others. It also cannot be ruled out that the child may have been coached by elders into claiming that there was a rubout, not a shootout between police and Secretaria and his suspected accomplices.

But her account remains disturbing for anyone who still believes in due process and abhors summary killings of hardened criminals. Police are said to be open to any investigation of their operation but seeing how any inquiry could drag on for months, the grisly details of this operation may be consigned to the back burner and be overtaken by other, perhaps more violent operations.

The Banacon Island operation may be the launching pad for an aggressive, zero tolerance campaign against drug traffickers and other criminal suspects not only in this part of the country but nationwide as we enter the Age of Duterte but how far would this go without risking the police going overboard?

Read Next
Textbook-ready for grade 11?