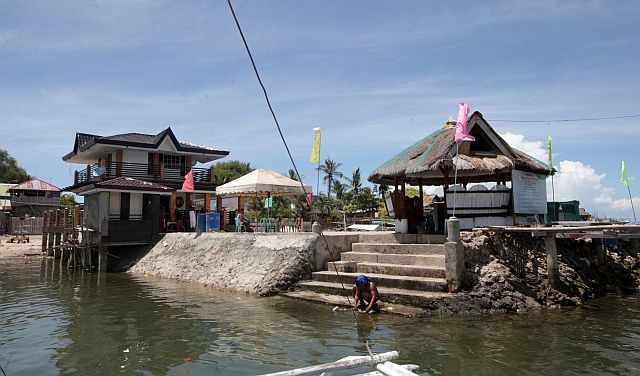 Banacon Island, Getafe in the northern coast of Bohol. Heralded by the Bohol provincial government as an ecotourism destination for what it considers to be the biggest mangrove plantation in the country.

The island has 425 hectares of mangrove forests and its proximity to Cebu makes access easy for those seeking an outdoor adventure.

From Tagbilaran City, a 3-hour bus ride to Getafe wharf followed by a 20-minute pump boat ride will take you to the island.

But for residents of Ermita, Cebu City with relatives in Banacon, a visit to the island could mean just a short 30-minute ride on private pumpboats that snake through intertwining mangrove trees toward a village wharf developed by Cebu City’s No. 3 most wanted man, the slain Rowen “Yawa” Secretaria.

An urban legend has it that Secretaria covered the distance to the island on a jet ski, much faster than pumpboats from Ermita.

This was the life that Secretaria lived for years: a fugitive who freely jetskied from Cebu to a hideaway in Getafe, Bohol where he owned a big house and several cottages.

When he was visiting, he pampered residents with free rice and food and gave away money to those in need. He also provided the island’s solar power source and a generator.

The distance between the island-village from mainland Getafe coupled with logistical challenges prevented them from arresting Secretaria, he explained.

“Naa mi madawat nga info pero dili mi maka-timing. Mokalit ra siya ug anha and mokalit ra sab ug kawala (We received information but we could not catch him there. He easily gets out of the island and also quickly disappears),” Mejias said in a phone interview with Cebu Daily News.

Mejias added that Getafe police also had to rent a motorboat at P500 a day if they were to get to the island which was an added operational cost to the unit.

But the raid last Saturday showed that what Getafe policemen failed to do, Cebu-based operatives succeeded with the killing of Secretaria along with two alleged cohorts in a reported shootout with members of the Regional Anti-Illegal Drugs Special Operations Task Group in Central Visayas (RAIDSOTG-7), Regional Public Safety Battalion (RPSB) and the intelligence branch of the Cebu Provincial Police Office.

According to Mejias, the raid was coordinated with him by the leader of the raiding team. This is contrary to Comendador’s earlier statement to CDN that Bohol police were not informed of the raid for “operational security purposes.”

And while Mejias stands to lose his bearing in the PNP chain-of-command for failing to stop a criminal operating in his area, police officials in the region hailed the Banacon operation as a feather in the caps of Cebu-based operatives amid claims of a rub-out by relatives of the slain suspects.

Comendador said the operation was a major accomplishment in their campaign against illegal drugs.

“We hit a very sensitive nerve in Banacon Island. That is why a lot of issues have come out after the operation,” Comendador told reporters yesterday.

Comendador said the island is a transshipment point for illegal drugs with a number of residents involved in the illegal drug trade as dealers or protectors.

“I fully support my men (raiding team). I want people in Banacon to know that we are not playing games here. We are serious in our campaign (against illegal drugs) because lives are at stake, including those who are crying for our protection in that island,” Comendador said.

About 17 RPSB personnel arrived in the island, Tuesday, to diffuse tension in the area and to conduct a manhunt operation on Secretaria’s two brothers who are subjects of separate arrest warrants for murder.