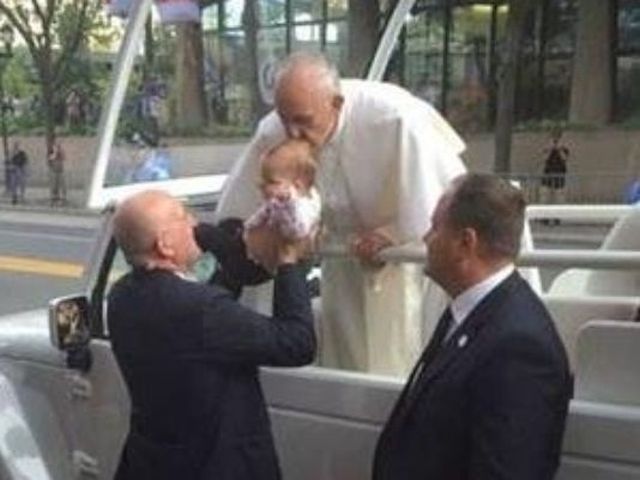 Pope Francis kisses Masciantonio during his visit to Philadelphia in September. (Photo taken from Google)

A family in Philadelphia, United States, feels blessed with a “miracle from the heavens” as their sick infant daughter is recovering fast after she was kissed by Pope Francis in 2015.

Two months after her birth, Gianna Masciantonio was diagnosed with juvenile xanthogranuloma, a rare form of histiocytosis, or tumor in her brain stem. Doctors told family members that their “little angel” had little chances of survival.

“Gianna was diagnosed with an inoperable brain tumor,” said her father, Joey Masciantonio, in an interview with NBC News. Gianna underwent brain surgeries and chemotherapy sessions for the next several months.

A day after the family celebrated Gianna’s first birthday, the family received a phone call from a friend, Federal Bureau of Investigation agent Don Asper, who offered them special passes to welcome Pope Francis during his visit to the American state.

Unaware of the baby’s serious ailment, the Pope stopped to kiss Gianna’s forehead, centimeters away from the brain tumor.

Two months after the Pope kissed Gianna, a new Magnetic Resonance Imaging result declared that her tumor, which had repelled chemotherapy treatments before, had almost dissipated. The infant’s health has greatly improved.

Pope Francis received news about the baby’s condition and signed a framed portrait of him kissing Gianna. The priceless gift was delivered to the family on Tuesday.

“She’s still in chemo now. It gave us hope. It gave us strength. It gave other people strength. That kiss meant more to my family than anyone could ever imagine.”

Read Next
Coastal cleanup gathers over 1,000 kilos of waste