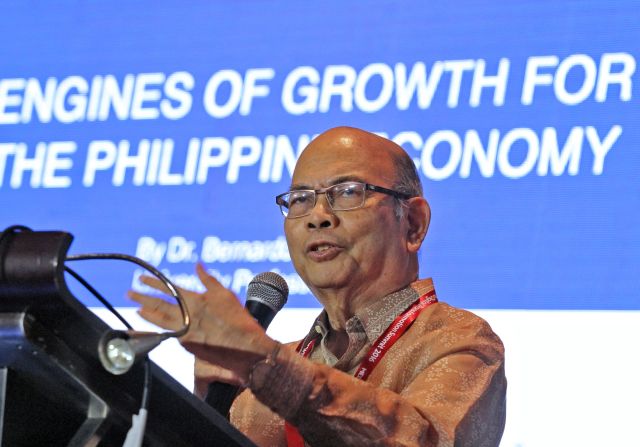 Dr. Bernardo Villegas, senior vice president of the University of Asia and the Pacific, shares his views about the country’s economy with the participants of the Cebu Digital Transformation Summit at Radisson Blu Hotel. (CDN PHOTO/JUNJIE MENDOZA)

A change in administration will have little to no effect on the growth of the Philippine economy due to huge revenue contributions from overseas Filipino workers (OFWs) and the information communications technology-business process management (ICT-BPM) sector, an economist said.

Dr. Bernardo Villegas, senior vice president of the University of Asia and the Pacific, said the country would continue to enjoy a six- to seven-percent gross domestic product (GDP) growth annually regardless of who sits as president.

“It doesn’t really matter, considering what the engines for economic growth are,” he said during the second day of the Cebu Digital Transformation Summit 2016 held at the Radisson Blu Hotel in Cebu City yesterday.

Villegas even projected that the country’s economy will grow by at least 7.5 percent by year-end.

He attributed the country’s growth in recent years to remittances of OFWs and revenue from the ICT-BPM sector, which amounted to $28 billion and $22 billion, respectively, in 2015.

Overseas workers’ remittances have been growing by three to five percent annually since 2007, making them one of the most reliable sectors contributing to the GDP of the country. (The GDP is the monetary value of all the goods and services produced by the country in a given period.)

ICT-BPM industry leaders, on the other hand, projected its revenue to increase to more than $25 billion by the end of 2016.

Villegas said that in two years, the ICT-BPM sector, with an annual growth rate of around 18 percent, would be contributing to the country’s GDP as much as the current contribution of OFWs.

The university executive said the Philippines will maintain economic momentum on the basis of consumer-led recovery, but if incoming President Rodrigo Duterte delivers, he projected this growth to increase to 8 to 10 percent annually in the next six years.

Villegas said Duterte needs to improve peace and order, implement “trillions of pesos” in infrastructure projects shelved during the present administration, and attract more foreign investors by easing up on restrictions in business for foreigners.

“With an 80 percent chance of succeeding, we are going to enjoy 8 to 10 percent GDP growth rate in the next 6 years,” said Villegas.

An eight to ten percent growth in GDP, he added, will generate more resources to attend to the needs of 25 million Filipinos living in poverty.

Villegas said 75 percent of those who are poor are fishers, coconut farmers, and kaingeros (slash-and-burn farmers), among others.

He said the only way to bring growth to them would be by building more farm-to-market roads, irrigation systems, and post-harvest facilities.

Aside from rural infrastructure, the incoming administration should also improve the quality of basic education for indigents in the countryside to be at par with the kind of education offered in urban areas, build more rural clinics, and make potable water accessible to the poor.

If implemented properly, Villegas said the country’s 25-percent poverty incidence would go down to less than 10 percent in 10 years.

At present, the Philippine population is already approaching the 101-million mark.

Read Next
Railway for PH