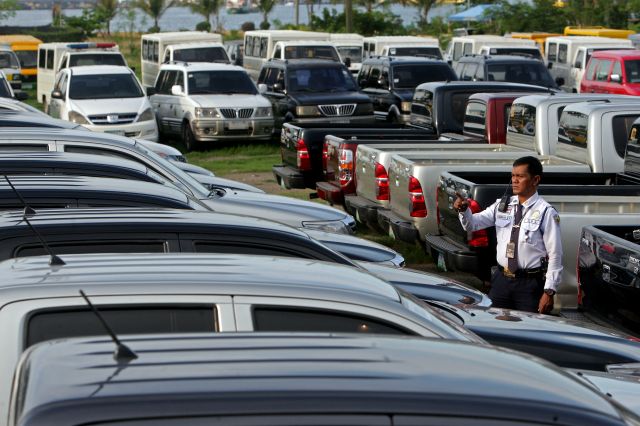 RECALLED CITY VEHICLES. A security guard inspects the controversial city-owned vehicles recalled from barangays and city departments on the order of Acting Mayor Margot Osmeña. The vehicles are impounded inside the Sugbo compound at the South Road Properties (SRP). (CDN PHOTO/TONEE DESPOJO)

Mike went around in a P2.2M ‘emergency response vehicle’

The vehicle, a Toyota Super Grandia, which cost P2.2 million and used by Rama since February until it was returned to the city on May 17, was charged to the city’s disaster response and rescue equipment fund and was categorized as an “emergency response vehicle.”

Acting Mayor Margarita “Margot” Osmeña, speaking to reporters yesterday, said they would now have to review the purchase documents to see if the acquisition made by the suspended mayor was valid.

“He (Rama) had an old one and he ordered a new one, which they charged pala (apparently) also against the (disaster funds). And they declared it as an emergency vehicle,” she noted.

Since Rama was actually using the vehicle, Osmeña quipped: “Something (an emergency) happens every day.”

Moreover, the Grandia is among ten Toyota vehicles which were all delivered by the car dealership in February costing a total of P15 million but has remained unpaid up to now, according to General Services Office (GSO) assistant head Ronald Malacora.

He said they did not know that the vehicles — the Grandia, eight Fortuners and an Innova, were still to be paid until the Toyota Cebu dealership sent a personnel to City Hall to collect payment for the vehicles.

GSO documents showed that the Grandia was turned over to Rama and was used starting Feb. 1, but its purchase order was only signed by Rama on May 2, while the notice of award by the city’s bids and awards committee (BAC) was only approved on May 11.

Asked if the city would pay for the Toyota vehicles, Osmeña said they might opt not to if they could determine that there was no need for these vehicles.

Malacora said Rama had returned two vehicles on May 17, including the Grandia.

Of the ten Toyota vehicles, the eight Fortuners, each costing P1.5 million, are now used by the Cebu City Police Office (CCPO), which were distributed by Rama to the police shortly before the elections; while the Innova, costing P800,000, is still unused and intended for the Office of the City Civil Registar, said Malacora.

Rama, sought for comment, responded via text message to Cebu Daily News saying that it was the supplier, not him, that should answer why it delivered the vehicles ahead of the approval of the purchase order.

Malacora said that until the Toyota dealership came to collect the payment, they did not know that the vehicles were still unpaid.

He said they found out that the City Accountant’s Office was still processing the payment for the Innova while the documents for the eight Fortuners and the Grandia were still in the office of suspended Councilor Dave Tumulak, who chaired the BAC.

Malacora said he was informed by the staff of Tumulak that the documents for the Fortuners and the Grandia could not be processed because there was no one to sign the Acknowledgment Receipt of Equipment (ARE) .

The Toyota vehicles were not yet included in the list of about 500 vehicles that the city government, under the Rama administration, has bought in the last five years for a total of P560 million, and became the subject of the memorandum issued by Osmeña recalling these vehicles for inventory, particularly those issued to barangays.

Barangay captains have initially defied the recall order but their resolve seemed to have weakened with the number of erstwhile defiant village chiefs now down to 18.

Yesterday, a day after Osmeña filed criminal and administrative cases against 48 barangay captains and officials for refusing to heed her memorandum recalling the vehicles, only 18 barangays continued to hold on to the automobiles, Malacora said.

Tisa Barangay Captain Philip Zafra, who sits in the city council as president of the city’s Association of Barangay Councils (ABC), last week led the group of 42 barangay captains who had declared their refusal to return the city-issued vehicles.

On the other hand, the most recently returned vehicles was made by Carreta Barangay Captain Eduardo Lauron, who returned his Toyota service vehicle yesterday morning.

Sudlon 1 Barangay Captain Dante Tabucal also returned to the GSO the Toyota Hilux and Innova assigned to his barangay.

Tabucal stressed he returned the vehicles only now because they were still used for a summer youth camp and not because he was scared that he was named as respondent in the case filed before the Ombudsman by the acting mayor.

A number of the recalled vehicles have actually been returned or reissued to the barangays where they came, according to Malacora.

He said that among those that got back their vehicles were Barangays Adlaon, Buhisan and Pahina Central.

Malacora said they would reissue vehicles to the barangays for as long as they could justify where these would be used.

He cited the case of Barangay Adlaon, which, on the order of Osmeña, got back its L300 van after it was confirmed that it was needed to transport to the hospital a bedridden resident.

He said they only reissued several buses and multicabs to Barangays Buhisan and Punta Princesa but the captains of these barangays have yet to get back the high-end service vehicles, such as a Toyota Hilux, that were previously assigned to them.