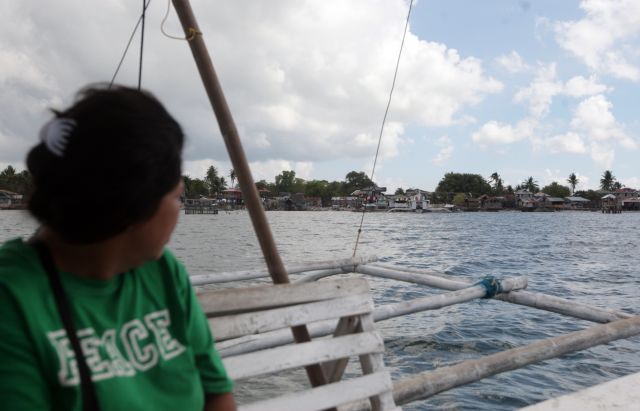 A 30-minute pumpboat ride from Mactan, Banacon Island was sanctuary of an alleged drug lord who commanded the loyalty and silence of the islanders. (CDN PHOTO/TONEE DESPOJO)

The death of drug lord Rowen Secretaria, alias Yawa, might have been a cause for celebration for the Cebu police, but the residents of Banacon Island in Getafe, Bohol have nothing but tears over the loss of a generous patron.

His death in the hands of anti-drug agents on May 28 brought sorrow to more than 1,000 residents on the island, so much so that they even canceled their fiesta celebration on May 31.

A resident named Mike recalled Secretaria gave him P200,000 to replace his fishing boat that was destroyed by typhoon “Seniang” (international name: Jangmi) in 2014.

“I didn’t ask where the money came from. I didn’t care because the money was not mine. What was important is he was there to help us,” he said.

Another, Romulo, borrowed money from Secretaria when his mother needed surgery in Cebu City.

“No one could help us at that time except him,” he said.

While Mike and Romulo said the money was given unconditionally, Secretaria received what he really wanted from the residents — loyalty and silence — so he could continue his drug trafficking activities freely.

Turning a blind eye was easy for them, as there was no government presence on the island.

The Bohol Capitol showcased Banacon Island as an ecotourism destination for hosting the country’s biggest manmade mangrove forest. But it is also one of the poorest villages in the province.

Most villagers earned less than P3,000 a month in 2014, the International Journal of Environment and Rural Development reported. Only three percent of them were considered well off, while 87 percent lived below the poverty line.

“We are from the island. It is seldom that we get help from the mainland,” said Macaria, who was interviewed inside her nipa hut while playing “tong-its,” a card game, with her female neighbors.

The municipal government maintained that basic services were being provided to the villagers. “The local government unit (LGU) was not remiss in its duty to provide the needs of Banacon. All the requests of the village officials were accommodated by the LGU,” said Herbert Torreon, clerk at the office of Mayor Casey Shaun Camacho.

Torreon said a midwife would go to the island twice a week while a municipal physician would bring medicines every Monday, Wednesday and Friday.

Bohol second district Rep. Erico Aristotle Aumentado, to whose district Getafe belongs, had provided livelihood projects for islanders. But without electricity, most households on the island use kerosene lamps while a few big houses have power generator sets. Thus, he said, officials had given priority to the electrification of Banacon, which has been included in the first batch of island-villages that will be energized this year.

“All other livelihood projects come after energization since their main source of livelihood is fishing,” he said. “With electricity, people in Banacon will not be forced to sell their catch at a very minimal price because they can now keep their excess catch through cold storage. By protecting the prices of fish, it is expected to increase the income of the fisherfolk of Banacon.”

While many Banacon families still depended on fishing, some ended up joining the group of Secretaria in selling drugs. This explained why some jobless residents live in concrete houses and have satellite dishes to feed cable channels to their widescreen television sets.

Supt. Ricky Delilis, spokesperson of the Bohol provincial police, described the drug lord as “elusive” and seemed to be protected by everyone on Banacon.

On May 28, however, Secretaria’s luck ran out after the police from Cebu received information that he would be home in time for the fiesta. The suspected tipsters, a couple, were found dead the next day at the public cemetery on the island.

Read Next
Who takes care of the orphaned children?