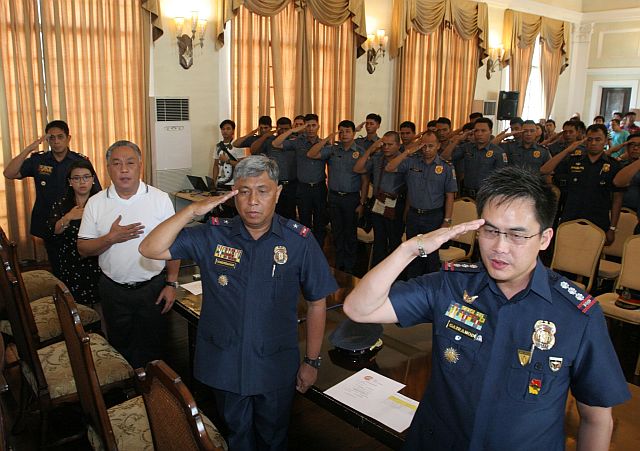 Erring policemen across the province are not exempted from the Cebu Provincial Police Office’s (CCPO) anti-drug operations and will be shot dead if they fight back.

If it comes down to it, anti-illegal drugs operatives will have to shoot or “neutralize” their fellow men in uniform if they fight back or resist during operations, said Senior Supt. Clifford Gairanod, CCPO director.

“We are cleansing the ranks of PNP (Philippine National Police) officers in Cebu province. There have been encounters with fellow policemen during operations. We won’t hesitate to shoot people, even men in uniform, if they are protecting or coddling drug pushers,” Gairanod told reporters at the Capitol yesterday.

“How can we rid our society of illegal drugs if our own policemen are violators and protectors? We should starting cleansing our own police force,” he added.

Gairanod and other police officials and personnel were in the Capitol yesterday to receive incentives and rewards from the provincial government for successful anti-illegal drugs operations in the first quarter of this year.

He said police officers who are protecting drug lords should resign from the service.

Together with the Cebu Provincial Anti-Drug Abuse Commission (Cpadac), the CPPO has been conducting surprise drug tests in police stations throughout the province.

Just this month, they conducted drug tests at the Danao City Police Station and at the Dalaguete Police Station, said Supt. Rodolfo Albotra Jr., chief of the Provincial Intelligence Branch (PIB) of the CPPO.

He said one policeman was found positive for drug use but his identity will remain confidential until the confirmatory tests are conducted.

“One thing is for sure, if confirmed, administrative proceedings will go on,” Albotra said in yesterday’s Kapistorya at the Capitol’s Dignitaries Hall right after the awarding of the incentives to the police.

The CPPO reported that for the period from Jan. 1 to June 9 this year, their anti-drug operations resulted in the arrest of 923 persons and yielded 3,819.02 grams (3.8 kilos) of shabu (methamphetamine hydrochloride). The Dangerous Drugs Board (DDB) valued the seized drugs at P45.44 million.

The CPPO also reported a total of 1,018 cases filed in court this year.

“We are really monitoring the cases filed in court so that these won’t be dismissed especially with the new president’s strong campaign against illegal drugs,” said Gairanod.

The Capitol, meanwhile, awarded 53 policemen from PIB and the stations in San Fernando and San Francisco towns for successful operations conducted from January to March this year. They received a total of P1.62 million in cash incentives. This was charged to the Cpadac’s budget this year, said Provincial Board member Ivy Durano-Meca, current vice chairperson and incoming executive director of Cpadac.

The PIB was able to conduct 12 operations in the first quarter of this year which yielded a total of 863.09 grams of shabu valued at P1.239 million. The 34 PIB personnel involved in the operations were awarded a total of P1.52 million as incentive.

Meanwhile, 12 police officers from San Francisco Police Station involved in an operation last March 15 which led to the seizure of 11.21 grams of shabu worth P132,278 and the arrest of a suspect included in their watchlist for drug personalities, were given a cash reward of P65,000.

“The incentives are really a big help. This means the police officers will work more since they were able to receive money. I expect from them to have fruitful results,” said Gairanod.

Cebu Gov. Hilario Davide III, who led the turnover of the cash incentives, assured the policemen of the province’s unwavering support in their anti-illegal drugs campaign.

Chief Supt. Patrocinio Comendador Jr., Police Regional Office (PRO) 7 director, also encouraged policemen to continue their war against illegal drugs even if it is a “long, arduous and hard-fought battle,” that would demand personal sacrifice and cause problems on personal security.

“This is now a serious campaign. This campaign can only jump-start if we also lead as examples. Limpyohon nato atong kaugalingon (Let’s shape up). Let’s stay clean as we go through this fight. After all, it’s our children’s children that will benefit from this program,” he said.