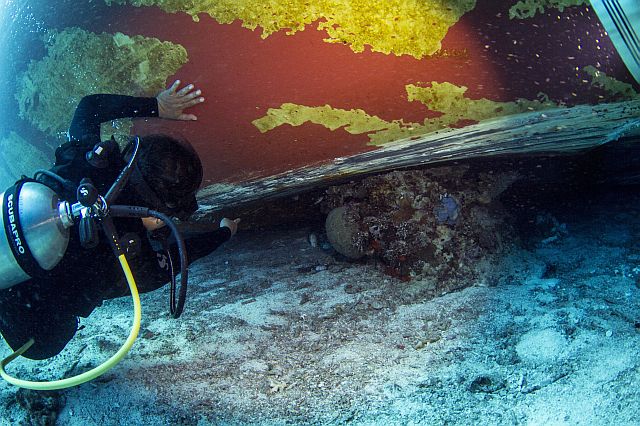 A diver finds a healthy coral head directly under the hull of MV Belle Rose which ran aground and plowed through Monad Shoal early morning of June 13. (CDN PHOTO/FERDINAND EDRALIN)

The operation to remove MV Belle Rose from where it ran aground in Monad Shoal off famed Malaspascua Island will begin today amid efforts to protect the massive coral reef on which the 186-meter bulk carrier rests.

Environmental lawyer Benjamin Cabrido said the salvor company hired to remove the vessel would need to move it backward because the forward section is shallower.

“If we moved the vessel forward then it will cause more damage to the marine life,” Cabrido told Cebu Daily News while at the site where the vessel was stuck.

Six divers, including two foreign consultants, who went down at 3:08 p.m. for an hour-long dive came back to report that the water depth at the vessel’s stern (aft-most part) was approximately 14 meters.

Marine biologist William Villaver of Penro, who joined the inspection, said the depth of Monad Shoal is 10 meters and the vessel would need a 12 meter-depth to float. The expected high tide today (9 a.m. to 2 p.m.) with 1.8 to 1.9 meters of water can also help operation, added Villaver.

MV Belle Rose was seen by divers still sitting on the massive coral reef, where it rested after plowing through a three-hectare area of corals and boulders. Rock and coral particles were strewn along the path where the ship plowed. Debris covered with red paint was also recovered by the divers from the back section of MV Belle Rose.

During the second dive, at 4 p.m., the divers placed markers 300 meters backward of the vessel, which, according to Cabrido, would guide divers as to where they can move the vessel.

“That will be their guide where they can move the vessel,” Cabrido said.

PCG Cebu Station Commander Agapito Bibat was worried about the presence of southwest monsoon (Habagat winds) as it could affect today’s operation to refloat the vessel.

At around 4 p.m. yesterday, Cebu Daily News and the rest who were on board the motorboat at the dive area experienced strong winds and waves along Monad Shoal. A light rain also followed.

Bibat said if the re-floating effort would not work, they would go to “Plan B,” which was to unload 300 metric tons of the ship’s 48,000 MT cargo of clinker, an aggregate to make cement.

Cabrido said that if the second plan would be pursued, the Malayan Towage and Salvage Corp., should have a suctioning machine and not a clamp.

“If they use a clamp, it will add more damage. There are clinkers, and it might fall in the sea. It will be an additional problem,” Cabrido said.

Bibat, who along with Cabrido and Baltazar boarded the Japanese-owned vessel, later told reporters that MV Belle Rose has complete documents for the vessel.

Bibat said they asked the ship captain for a copy of their radar screen that showed the alteration of its course. The ship’s captain, Vichar Neil delos Reyes, earlier said they veered off course to the right at dawn on Monday and ran into shallow water when they tried to avoid a group of fishermen in the area at that time.