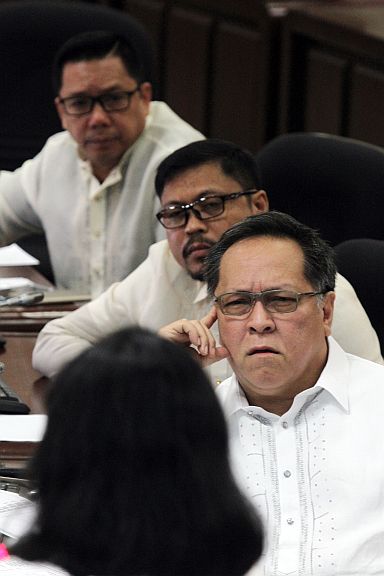 Cebu City Councilors James Cuenco, Philip Zafra and Richard Osmeña listen to Marietta Gumia (back to camera) of the City Budget office who explains the appropriations contained in the proposed 2016 budget during the budget hearing held right after the regular session. (CDN PHOTO/JUNJIE MENDOZA)

In what seemed to be a complete turnaround, the three-man Team Rama Cebu City Council yesterday took back its denial of the proposed 2016 budget and moved to deliberate on the proposed budget ordinance.

Right after the session yesterday morning, the council deliberated on the proposed budget ordinance up to the point where they identified the contents of the ordinance. They then moved to deliberate further on the budget on Monday.

The second revised annual budget proposal amounting to P6 billion submitted by Acting Cebu City Mayor Margarita Osmeña contains the appropriation for the mid-year bonus of city hall employees, their salary increase under Executive Order 201 and the terminal leave pay of outgoing employees, among others.

During the session, Councilor Richard Osmeña, in a “Privilege Motion,” moved for the council to deliberate on the proposed budget ordinance right after the session, which the council duly approved.

“I want to have a privilege motion concerning the budget and faced with the fact that the bonus of our employees will be good as dead. And having been rejected, I move that this Council will revive the revised 2016 Annual budget and to consider the same for further budget deliberation,” Councilor Osmeña said.

Last Monday during the budget hearing, Councilor James Anthony Cuenco moved to deny the passage of the budget, saying it was a “collective sense of the group,” the Team Rama elected councilors, who will dominate the incoming 14th Cebu City Council.

Not a party decision

Asked why he moved to deliberate on the budget ordinance, Councilor Osmeña said that he considered the situation of the City Hall employees who have been waiting for their mid-year bonus equivalent to one month’s salary.

“We were really thinking of the employees. There are some who will be leaving City Hall by June 30 and they will receive nothing. Nobody approached me, but I really felt pity for them. Some of them have not even been paid their salaries from January to June,” he said in Cebuano

Both Osmeña and Cuenco admitted that they did not consult the party regarding their decision to tackle the budget.

“Yeah, it was a party decision. Now, it’s a decision of the three of us. We decided on our own. So, whatever the members of the group may decide, we leave it to them. But for now, we just want to do what’s right,” Cuenco said.

Cuenco said the council can reconsider their previous act and deliberate on the budget because the ordinance was not killed during the budget hearing last Monday. It was merely moved that they would let the incoming councilors composing the 14th Cebu City Council do the deliberation on the budget ordinance.

“Ang parliamentary status, actually, is that after the budget deliberation which we did last Monday, for my motion to have been considered official, I should have presented a resolution before this regular session (Wednesday), which I did not,” he said.

His motion last Monday was not a formal one because it should have passed through plenary, and the manifestation was done in the course of the budget hearing, not during the plenary, he said.

He said the reason why he did not present any committee report and resolution during yesterday’s session was because a lot of employees asked him to reconsider the budget.

“Only fools don’t change their mind,” he said.

However, Cuenco said this is only the start.

“We cannot say for sure if we will be able to approve the budget. But, we will try as much as we can to accommodate the important items,” he said.

Sought for comment, Margot said it was good that the council decided to move the budget forward and that she was happy for the employees.

“Thank you. But I don’t anticipate anymore. I just take it as it comes because your anticipation might not come true,” she said.

Outgoing Cebu City Mayor Michael Rama clarified that it was not just a party decision but also the right decision to deny the deliberation of the budget.

He questioned why the acting mayor could submit a budget ordinance.

“That’s why I would like to clarify that it’s not just a party decision; it’s the right decision. Because what ought to be deliberated should never be from the one being, just coming in as acting, could it be a caretaker or nobody cares,” he said.

Rama said what should be deliberated is the budget he proposed in 2015 which is the P9.8 billion annual budget of 2016.

“But I’m just telling you, the right thing to do is really go back to that budget (P9.8 billion) to approve or disapprove,” he said.

Employees who learned of the turnaround of the Monday council decision expressed relief that there is still hope that they would get their mid-year bonus before the end of the month.

Marlon Hoffer, executive assistant II of the City Government’s Public Information Office said there is no legal ground to withhold their bonus.

“We employees deserve that bonus. We worked hard for that bonus,” he said. Hoffer supports his parents and spends for their medications.

A smile appeared on the face of 64-year-old Rey Raffiñan the moment he received the “uplifting news.” The elevator gaffer of the city hall’s legislative building said his four children and seven grandchildren are depending on his salary, not only for their education but also for their daily needs.

“I’m the sole breadwinner of the family, and that bonus means so much to me especially that I worked hard and decently for my family,” he said in Cebuano.