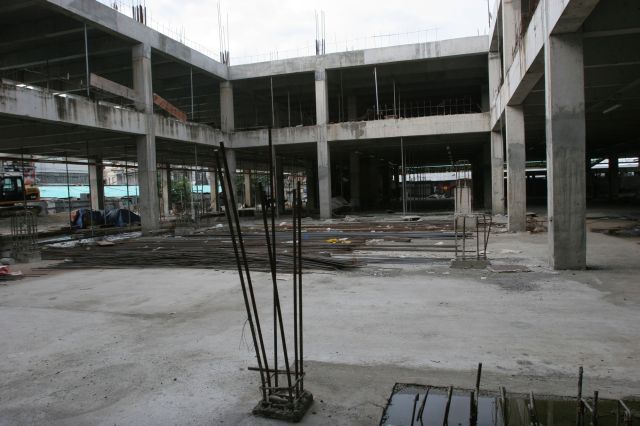 State auditors have found out that Geety Realty Development Corp., the contractor of the Carbon Market Unit II building, is not qualified to undertake the P167 million project. (CDN PHOTO/JUNJIE MENDOZA)

Terminate the contract and stop operations.”

These were the recommendations of the Commission on Audit (COA) on the delayed completion of Carbon market’s Unit II building during the state auditors’ exit conference with the Cebu City government yesterday.

Aside from the COA recommendations that the city government would implement, Cebu City Acting Mayor Margarita Osmeña said the the city government is also planning to file charges against the contractor of the project — Geety Realty and Development Corp.

The recommendation to end the contract is just one of the 54 “areas of concern” for the previous year discussed in the exit conference, and Margot said that this was disconcerting.

Osmeña said she also could not give a specific date when they would stop the construction at the Unit II building, but it would be soon.

She also said that once the contract is cancelled, the city government has to conduct another bidding for the project.

“But just for the balance (of the uncompleted part of the Unit II building),” she added.

According to a report from the Department Engineering and Public Works, the contractor has only completed 62 percent of the project as of April this year, prompting the DEPW to issue a notice to Geety Realty and Development Corp. to complete the project on June 30 or have the contract terminated and the firm would face liquidated damages.

The June 30 deadline was the fourth extension given to the contractor to complete the project.

Acting Mayor Osmeña also said that COA confirmed Geety Realty and Development Corp. is not qualified to carry out a P167.3 million project.

“In the first place, they were not qualified. The extent of their qualification to do contracting is only up to P100 million. This is a project that has a budget of nearly P170 million,” she said.

She also said that incoming Cebu City Mayor Tomas Osmeña in October 2015 wrote a letter to outgoing Mayor Michael Rama, informing him that Geety Realty’s track record does not meet the size range of the project mandated by the Philippine Contractors Association Board (PCAB) to pursue the project.

The classification table of the PCAB under Circular No. 001 Series of 2009 shows that a contractor should have a Single Largest Project completed amounting to no less than P50 million to qualify as a bidder for a project that costs P167 million.

Tomas Osmeña also stated in his letter that he found out the contractor had not obtained a license from the PCAB, which is a requirement for a contractor before engaging in any construction deals.

The Unit II building of Carbon market was burned down in 1998. Since then when the project started in April 2013, it has yet to be completed by the contractor./UP Intern Morexette Marie Erram