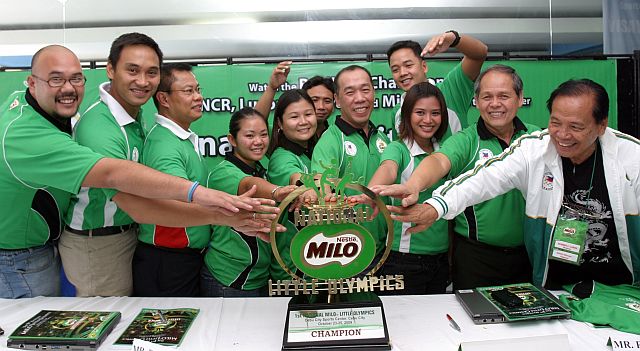 Now that the National Finals of the Milo Little Olympics has been shelved, Visayas delegation head Ricky Ballesteros could only look back and reminisce the glorious days of the Bisdaks.

Ballesteros confirmed the cancellation of the National Finals, but he remained optimistic that the multi-sporting event will return as a bigger and grander competition.

While the national meet was dissolved, there will still be regional finals this year in North and Central Luzon, NCR-South Luzon, Visayas and Mindanao.

The Visayas regional finals will be held in Cebu on Sept. 8-11.

The seven-year existence of the Milo National Finals has given Team Visayas a lot of good memories, Ballesteros said.

Ballesteros recalled how Team Visayas celebrated its first national title in 2009 when the meet was held in Cebu.

Team Visayas went on to complete a three-peat, becoming the first delegation to win the perpetual trophy.

Team Visayas’ archrivals, the National Capital Region (NCR), stole the perpetual trophy in 2012 after scoring its own three-peat.

“It was a timely win for Team Visayas last year because of what has happened now. There are a lot of athletes who have been discovered in the Milo National Finals and are now competing in the national and international levels,” said Ballesteros.

Ballesteros said Rhey Jay Ortouste, a member of Sepak Takraw national team who once played for Abellana National School (ANS), and multi-titled gymnast Daniela Reggie Dela Pisa who recently won a bronze medal in an international gymnastics tournament in Singapore and members of the Catmon Volleyball are among the top athletes that the Milo National Finals have ever produced.

According to Ballesteros, financial constraints is one of the reasons why Nestle Philippines stopped the holding of the national finals.

“They wanted to study the national finals first before bringing it back because they want to add more sports to the existing 13 sporting events, and they want other delegations like Mindanao and Luzon to improve and strengthen their core. They are planning to make it a biennial event,” he said.

Also, the assumption of the new CEO and Chairman of Nestle Philippines Suresh Narayanan became one of the reasons why the National Finals was stopped.

This year’s national finals was supposed to be held in Baguio City on October.

Nestle is also planning to make several changes such as making the football event a seven-aside competition.

Nestle is still undecided whether to make the basketball competition a 3-on-3 or the regular 5-on-5 format. They are also planning to include demo sports like Arnis and Karate-do, said Ballesteros.

Read Next
Niños’ U-17 sepak team remains in contention