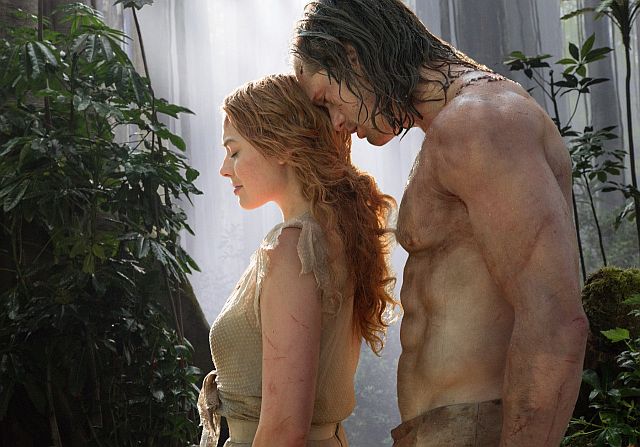 DIRECTOR David Yates  (“Harry Potter and the Half-Blood Prince”) brings the timeless Edgar Rice Burroughs story of an abandoned  baby raised by gorillas in deepest, darkest Africa to emerge as a loin clothed  superhero in “The Legend of Tarzan.”

The story of Tarzan is that of a son of a British lord and lady who were marooned on the Atlantic coast of Africa by pirates. When his parents are killed, the former John Clayton Viscount Greystoke becomes a  feral child raised by  gorillas in the African jungles with Tarzan experiencing “proper” British civilization only to eventually reject it and return to his jungle ways.

Burroughs’ anti-hero first appeared in the novel “Tarzan of the Apes” in 1912 — with 25 book sequels — and innumerable movies.
This time around it’s Alexander Skarsgård (from TV’s “True Blood”) in the titular role as Tarzan with super-hot Margot Robbie (from the upcoming Suicide Squad) as his lover Jane. 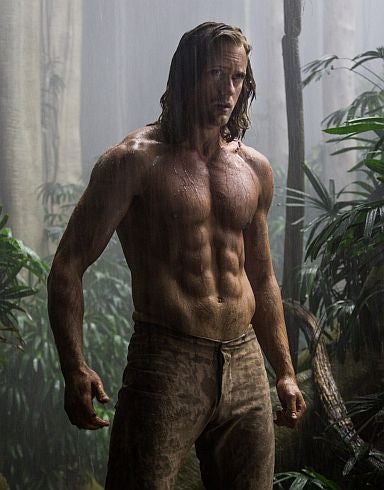 Skarsgård had been lobbying Yates and his Hollywood bosses for years to take on this role and own it.

Boy does he ever!

And Tarzan has never looked better.

Having acclimated to his life in London with his lover Jane never leaving his side, the King of the  Jungle is called back to his jungle home to investigate very suspicious activities at a mining encampment run by Oscar-winning Christoph Waltz as the evil Captain Rom.
Also along to bring a lot of class to “The Legend of Tarzan” is the great Samuel L. Jackson as the “British proper” George Washington Williams, Tarzan’s male sidekick.

Skarsgård is a terrific character actor who has few words but his screen presence is magnetic. He more than carries the mantle of Tarzan from 1930’s Johnny Weissmuller and Buster Crabbe to Christopher Lambert in the 1980’s to the incredibly dull Kellan Lutz in 2015.

Prior to Skarsgård’s current performance, 17 other actors have played Tarzan. The character is universally accepted by movie audiences around the world.

What works this time around is the truly effective CGI special effects that have finally caught up with the Jungle King, and the presentation of the Apes of Africa is something you must see. Yates is a terrific director and makes Tarzan’s transition from 1800’s London to colonial Africa a seamless visual treat.

He is the perfect director to bring Tarzan back to the silver screen.

”The Legend of Tarzan” is filmed entirely in the United Kingdom—with emphasis on some great location shots in Goldsmith’s Hall in London and Kedleston Hall in Derbyshire. Yates and his crew turned Dinorwig Quarry into a small slice of Africa and no one is the wiser.

In pushing for this role, Skarsgård also wanted a “hard” Tarzan with an “R” rating that would press the visual envelope. Not quite reaching that  rating, this is not the  Disney cartoon version of Tarzan but one who is unrelenting.

In saying that, do not allow your children to see “The Legend of Tarzan.” It is seriously not kid-friendly. Instead let anyone under 13 years old stay home with the Disney cartoon or even the recently theatrical run of “The Jungle Book” as this film version will shatter any memories of their smiling, tree-swinging Ape-Man.

When Robbie’s Jane is truly life-threatened, Tarzan goes “off the reservation” and gives Waltz and his mercenaries far more than they can handle.

And the presentation of Tarzan’s ape clan is amazing.

Bring some bananas along to your nearest cinema for any stray gorillas that may want to take up a seat and enjoy this fabulous retelling of “The Legend of Tarzan.”
Peanuts are extra.