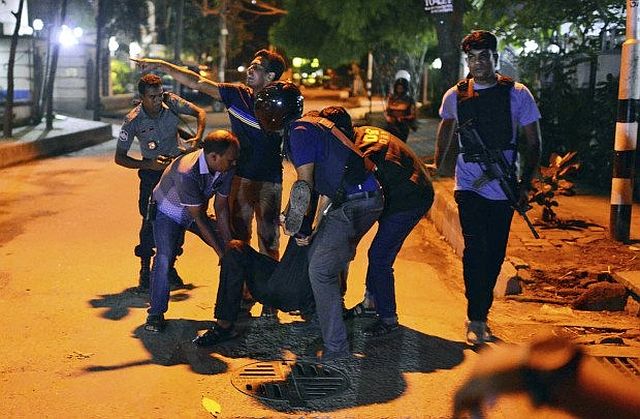 People help an injured person after a group of gunmen attacked a restaurant popular with foreigners in a diplomatic zone of the Bangladeshi capital Dhaka.

Dhaka, Bangladesh —A top Bangladesh military official says 20 hostages were killed in the attack on a Dhaka restaurant where heavily armed militants held dozens of people hostage in a 10-hour standoff.

Nayeem Ashfaq Chowdhury said six of the attackers were killed in the rescue operations early Saturday. Thirteen captives, including some foreigners, were rescued.

Chowdhury did not disclose the identities of the hostages.

The paramilitary troops who mounted the rescue operations recovered explosive devices and sharp weapons from the scene, he said.

The Islamic State group claimed responsibility for the attack on the Holey Artisan Bakery, according to the SITE Intelligence Group.

Prime Minister Sheikh Hasina has condemned the Dhaka restaurant attack by militants who took dozens hostage and vows to fight what she calls terrorist attacks that have rattled Bangladesh.

Hasina also said that security officials arrested one of the militants. Six others were killed, 13 hostage rescued while seven Japanese are unaccounted for.

Hasina says: “Because of the effort of the joint force, the terrorists could not flee.”

She vowed to fight terrorist attacks in the country and urged people to come forward.

She says: “Anyone who believes in religion cannot do such act. They do not have any religion, their only religion is terrorism.”

A Japanese government spokesman says a Japanese hostage has been rescued but seven others unaccounted for in the restaurant attack in Bangladesh.

Deputy Chief Cabinet Secretary Koichi Hagiuda said yesterday that the eight were together at the restaurant during the attack.

Hagiuda says the Japanese man who was rescued was shot and is still being treated. He declined to give specifics about the hostage’s condition but said he is able to talk.

He says the eight people were from different companies involved in the same project led by the Japan International Cooperation Agency.
The owner of the Bangladeshi restaurant at the center of the bloody hostage-taking says he wasn’t able to communicate with his staff.