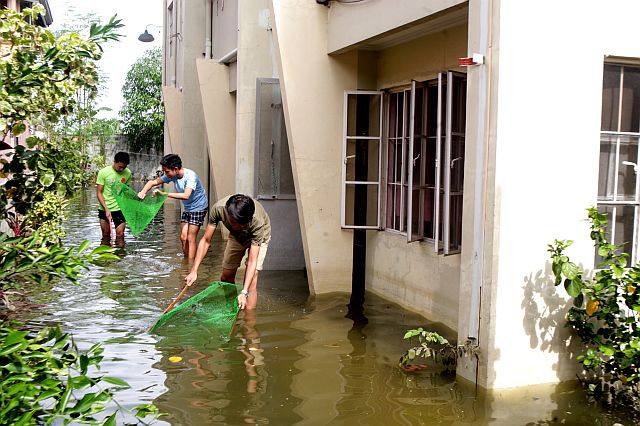 FISHING GALORE. Residents of Sitio B in Barangay Talamban, Cebu City go fishing on a flooded street outside an apartment building after a nearby fish pond overflowed on Sunday following two days of heavy rains.
(CDN PHOTO/TONEE DESPOJO)

On Sunday, Sitios B1 and B2, both low-lying areas across the University of San Carlos (USC) Talamban campus, remained submerged in murky knee-deep floods, leading authorities to worry about the residents’ safety and health.

Cebu City Councilor Alvin Arcilla, a former barangay captain of Talamban, said that he had asked village officials to evacuate affected residents to the Barangay Hall; however, the people declined as they wanted to look after their belongings and their homes.

“It’s dangerous for them especially if it rains at night, and they are asleep,” said Arcilla, adding that all that can be done for now is just to wait until the floodwater subsides.

For residents of the two sitios interviewed by Cebu Daily News, this was nothing new as they have grown accustomed to the challenge of wading through floods each time heavy rains pour into the city.

“We always expect floods here whether the rains are light or heavy,” 20-year-old Jean Silvania told CDN in Cebuano.

Silvania waded through knee-deep murky waters in her rain boots to go to an open sari-sari store, about 50 meters away from her family’s two-story house, to get some snacks.

For about a week now, she has been going to school with her rain boots as Sitio B1, she said, always ends up flooded even with the slightest rain.
Friday’s downpour resulted to waist-deep floods in her neighborhood, prompting her family to move all their belongings to the second floor of their house.

Interestingly, for some children in the village, flooding translates to an exciting game of catching runaway fishes from a nearby pond which overflows with water that it could no longer hold under heavy rain.

In a visit to the sitio yesterday, CDN chanced upon a young boy, Joshua Jaluag, who brought with him a small net which he said he would use to catch gold and milk fish swimming in the floods.

But fishes are not the only creatures lurking in the murky waters of the village. Last week, residents also found two snakes freely swimming there.

Other residents like 24-year-old Angel Transmonte decided to move out of their rented apartments to avoid further inconvenience brought on by the sitio’s drainage problem.

“I need to wear boots going in and out of the house. I make sure our oven, refrigerator and other appliances would be transferred first. I’m afraid time will come when the floods and heavy downpour would affect my work,” Transmonte told CDN.

City Hall will send health workers to the flooded areas today to check on the health of affected residents on top of relief packs consisting of rice and canned goods delivered by the city’s Department of Social Welfare and Services (DSWS) last Saturday.

Bañacia said that based on his assessment, he found a need to pursue earlier negotiations with the Mandaue City government to open a water outlet to dispose of floodwater from the two sitios into a nearby vacant lot located in Mandaue’s Barangay Cabangcalan, a neighboring village.

But until negotiations are revived, Bañacia said all that the city could do for now is to provide a temporary solution to the problem which would include the installation of footpaths there.

“The best solution there is to connect the area to a big creek in Mandaue. It will solve the flood problem even including AS Fortuna,” Arcilla said.

According to Arcilla, because water outlets on the side of Cebu City, like a portion of Mahiga Creek near Gaisano Country Mall, are more elevated than Sitios B1 and B2, they cannot take the outflow of floodwaters from the two areas.

However, the drainage line might have to pass through some private properties and that might be a problem, said Arcilla.

Meanwhile, the public can expect more rains this week as a low pressure area (LPA) earlier spotted outside the Philippine Area of Responsibility (PAR) has turned into a tropical storm Sunday morning.

Tropical storm “Butchoy” is packing winds of 65 kilometers per hour and moving northwest of Luzon Island.