Taliño ultimatum: Friday or else… 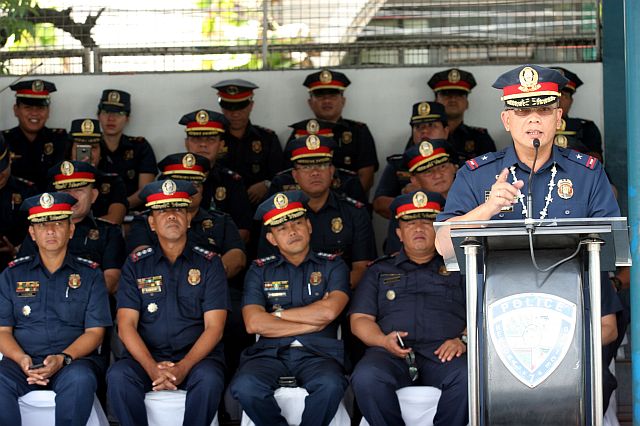 If President Rodrigo Duterte has zero tolerance on illegal drugs and crime, so does appear Chief Supt. Noli Taliño, the newly installed director of the Police Regional Office in Central Visayas (PRO-7) and a former chief of the Special Action Force (SAF).

A day after assuming his post here, Taliño expressed disgust over the failure of at least 70 police chiefs in the region to fight illegal drugs in their respective areas and gave them until Friday to prove their worth.

If they fail, the more than half of the region’s 126 police station commanders will be relieved from their posts not later than next week.

“For six months, most of them failed to arrest even just one of the top 10 drug personalities in their area. As in zero. Just imagine that. I’m really disappointed,” Taliño told reporters.

Taliño also challenged city and provincial police directors in the region to assist their “non-performing” police chiefs in the campaign against illegal drugs; otherwise, they too shall go.

“If the city and provincial directors won’t do anything, then I will do something,” he said.

Earlier last February, the Philippine National Police headquarters in Camp Crame ordered all police chiefs to submit the names of the top 10 drug personalities in their respective areas.

As soon as Taliño assumed his post last Monday, the former SAF chief learned that of the drug personalities listed in Central Visayas, many have remained free as several station chiefs had not done anything to arrest them.

Based on the records of PRO-7, out of 126 police stations in Central Visayas, 70 failed to arrest the top drug personalities in their area, with 52 of them failing to arrest even just a single drug personality.

Thirty-one of these non-performing police stations are spread across Cebu province with one located in Lapu-Lapu City while 20 others are in Bohol.

At least 18 other stations have effected some arrests but were not enough to pass Taliño’s standards.

“I’m giving them until Friday to make some actions. If a police chief has been assigned in a place for a year and he has done nothing, bakit pa natin siya pagtitiyagaan? (Why should we put up with him?)” he added.

After Friday, the 70 police station chiefs will be evaluated by a committee led by Senior Supt. Rey Lyndon Lawas, PRO-7’s deputy regional director for operations.

Lawas, in a separate interview, said all police chiefs should have arrested at least five of the top 10 drug personalities in their respective areas by now.

To pass the evaluation, he said police chiefs should arrest more than 10% or at least two of three drug personalities before Friday’s ultimatum given by Taliño expires.

“We will ask the concerned police chiefs to explain and justify why they failed to arrest the drug personalities in their area. It’s easy to say that the targets are gone or have stopped peddling drugs, but show me your proof. We’re not playing games here. We’re serious in our campaign against illegal drugs,” Lawas said.

Meanwhile a week-long anti-drug campaign conducted by the Philippine National Police (PNP) from June 17-26 netted a total of 950.28 grams of illegal drugs with an estimated value of P11.2 million.

According to a PNP Cebu report, the campaign had seen 83 operations conducted which resulted to 136 persons arrested and five suspects killed. Twenty-one suspects remained at large.

Meanwhile, the top-ranking city police stations are Danao (120.44 grams), Bogo (6.98 grams) and Carcar (1.12 grams).
The latest Limpyo Probinsya will be the last because “limpyo”, meaning “to clean” in Cebuano, should be a continuing activity and not just a scheduled week-long anti-drug campaign, Taliño said.