Going against the tide 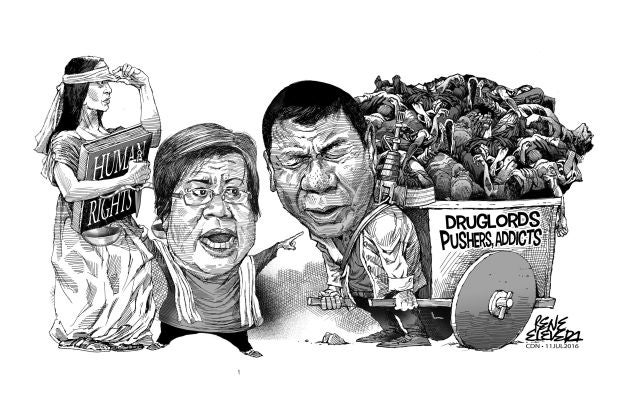 With the war on crime, specifically against illegal drugs, in full on mode by the Duterte administration, someone in the national government was bound to speak out against the escalation and talk about dialing it down — and of course we’re not talking about the Commission on Human Rights.
Sen. Leila de Lima sought an inquiry into the spate of deaths of drug suspects which runs over 60 as of July 6 based on estimates by the Philippine Daily Inquirer.

The senator, who had earned the President’s ire during her days as justice secretary attending congressional hearings on the rice smuggling syndicate and extra-judicial killings in Davao City, is not about to roll over and dance to Mr. Duterte’s tune even if he controls the majority of both houses of Congress.

In seeking an inquiry into the deaths of these drug suspects whom she said had shown telltale signs indicating summary executions, De Lima compared it to the infamous “killing fields” of Cambodia’s Khmer Rouge in which more than a million people died due to political persecution.
Since the deaths involve suspected drug dealers and users, not a few people would question the veracity of De Lima’s analogy or comparison, but what people may conveniently forget amid the gung-ho atmosphere and generally enthusiastic public support for decisive action against these criminal types is the often rushed, expeditious manner through which police corner and deal with them.

With promises of cash reward amounting to more than P50,000 for every kill, it’s hard to verify whether the operation that ended with the drug suspect dead had followed traditional police procedures.

It is these traditional police procedures — informing the target of their authority and their rights — that De Lima said should be institutionalized to make sure that the police aren’t engaging in a killing spree in the streets.

Unfortunately for the senator and the rest of the presumably Liberal Party-allied lawmakers, public mood and Congress sentiment are not on their side. And if the President’s message in his inaugural speech wasn’t clear enough — “you mind your business, and I mind mine” — then his allies in the Lower House are only too happy to make it clear to her.

Still, procedures and steps should be taken to make sure that operations against these criminals are done by the book which would be extremely difficult if the criminals not only resist arrest but employ more dangerous methods to keep themselves “in business.”

De Lima is doing the Filipino public a service by trying to rein in, unsuccessfully perhaps, the Duterte administration’s full throttle campaign to rid the country of criminality within six months. But as anyone familiar with riding a bull knows, one risks the chance of being trampled by it if one doesn’t watch out.

Read Next
Living and loving the law